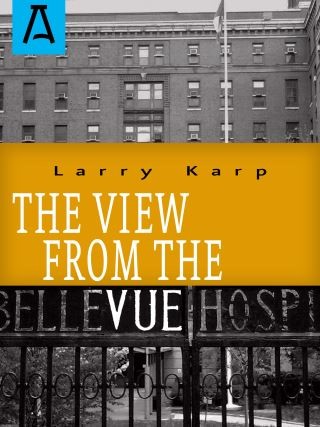 The View from the Vue

“We called it THE VUE, and without a doubt, that was the most complimentary nickname Bellevue Hospital ever had.” So begins The View from the Vue, an “entertaining, colorful recall” (Publishers Weekly) of life a half-century ago at New York City’s medical court of last resort.

Between 1959 and 1965, Dr. Larry Karp served as medical student, intern, and resident physician at Bellevue. During these six years, he came to know and understand the people who wended their way through the dingy hallways and roach-infested subterranean passages, and inhabited the sparsely furnished wards of the fabulous hospital whose origins date back to 1811. It’s not surprising that Dr. Karp has never been able to forget The Vue. Writing in a style both human and humorous, he recalls some of the astonishingly funny and dramatic events he lived through, involving bizarre patients and grotesque working conditions. In the process, he gives us a clear picture of what it was like at Bellevue in the early sixties . . . for both doctors and patients.

Larry Karp: Larry Karp grew up in Paterson, NJ and New York City. He practiced perinatal medicine (high-risk pregnancy care) and wrote general nonfiction books and articles for 25 years. Then, in 1995, he left medical work to begin a second career, writing mystery novels. The backgrounds and settings of Karp’s mysteries reflect many of his interests, including musical antiques, medical-ethical issues, and ragtime music. His most recent book, A Perilous Conception, is set in 1976, when doctors around the world were racing to become first to the wire to produce a baby via in vitro fertilization.

Other mystery novels by Larry Karp include The Ragtime Kid, The King of Ragtime, and The Ragtime Fool (a historical trilogy), First Do No Harm, The Midnight Special, Scamming the Birdman, and The Music Box Murders. Larry’s mysteries have been finalists for the Daphne Du Maurier and Spotted Owl Awards, and have appeared on the Los Angeles Times and Seattle Times Bestseller lists. The Ragtime Kid was San Marino CA’s selection for its 2011 One Book/One City Event.

Larry’s nonfiction books include Genetic Engineering: Threat or Promise?, The View from the Vue, and The Enchanted Ear.