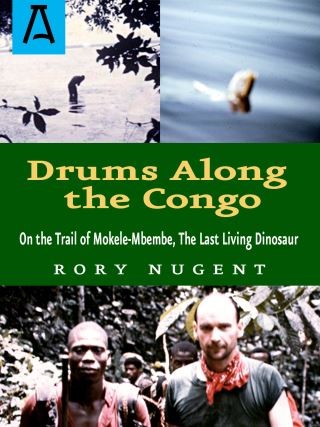 Drums Along the Congo

On the Trail of Mokele-Mbembe, the Last Living Dinosur

In the heart of the Congo is rumored to live a dinosaur called Mokele-Mbembe, or the god-beast. A handful of scientific expeditions have searched for it over the years with little success, but Nugent relied less on science than a desire to document the obscure. He made his way by dugout canoe and foot to Lake Tele, reputed home of the brontosaurus-like creature. It’s an environment little changed since the age of dinosaurs and he spent weeks paddling and trekking the area. He finally spotted a periscope-shaped object moving through the water. But when he tried to get closer, his guides threatened to shoot him, explaining that the “the god can approach man, but man never approaches the god.” Nugent’s photographs have been reprinted hundreds of times by those who believe in the god-beast. Drums Along the Congo merited inclusion on “Best 50 Books of the Year” list compiled by every major US newspaper.

Rory Nugent: Rory Nugent is a writer and explorer. His work takes inventory of cultures and traditions gone missing and about to go missing. His findings have appeared in newspapers and magazines published around the world, and in his three books: Down at the Docks, The Search for the Pink-Headed Duck, and Drums Along the Congo.