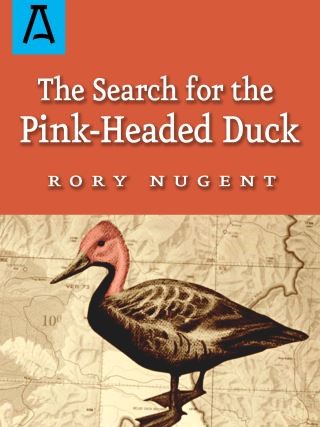 The Search for the Pink-Headed Duck

A Journey into the Himalayas and Down the Brahmaputra

Fifty-two years after the pink-headed duck was last seen in the wild, Rory Nugent set off for India in search of this exceptionally rare bird. In Calcutta he prowled the fowl market, where a few of the ducks used to appear during the Raj. Traveling on to Delhi, he was befriended by a Cambridge-educated smuggler, and he learned of remote regions to the north where the duck might be found. In Sikkim, following the trail of a Yeti, he became lost in the Valley of Bliss and nearly imprisoned inside a forest of rhododendrons, each the size of a ranch house. Making his way to Assam, he bought a 13-foot skiff and paddled the Brahmaputra River from Burma to Bangladesh, with stops on an island, considered to be Kali’s left breast, and at a Tantrist temple, where he stumbled on a grisly ritual in a graveyard. In a secluded marsh along the river he may have spotted the world’s rarest duck.

Rory Nugent: Rory Nugent is a writer and explorer. His work takes inventory of cultures and traditions gone missing and about to go missing. His findings have appeared in newspapers and magazines published around the world, and in his three books: Down at the Docks, The Search for the Pink-Headed Duck, and Drums Along the Congo.