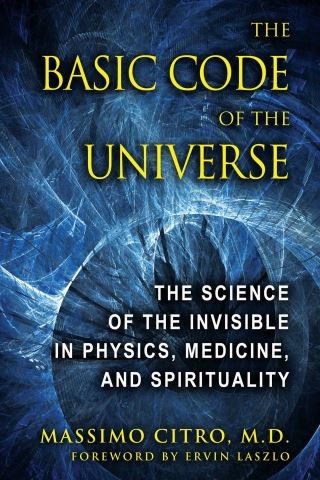 The Basic Code of the Universe

The Science of the Invisible in Physics, Medicine, and Spirituality

Explains the universal information code connecting every person, plant, animal, and mineral and its applications in science, health care, and cosmic unity

• Reveals the connections between the work of Ervin Laszlo on the Akashic field, Rupert Sheldrake on morphogenetic fields, Richard Gerber on vibrational medicine, and Masaru Emoto on the memory of water

DNA dictates the physical features of an organism. But what dictates how something grows--from the division of cells in a human being to the fractal patterns of a crystal?

Massimo Citro reveals that behind the complex world of Nature lies a basic code, a universal information field--also known as the Akashic field, which records all that was, is, and will be--that directs not only physical development and behavior but also energetic communication and interactions among all living and non-living things. The author examines research on consciousness, quantum physics, animal and plant intelligence, the power of intention, emotional fields, Kirlian photography, and the effects of thoughts, emotions, and music on water. Linking the work of Ervin Laszlo on the Akashic field, Rupert Sheldrake on morphogenetic fields, Richard Gerber on vibrational medicine, and Masaru Emoto on the memory of water, Citro shows how the universal information field connects every person, plant, animal, and mineral--a concept long known by shamans and expounded by perennial wisdom. Putting this science of the invisible to practical use, he explains his revolutionary system of vibrational medicine, known as TFF, which uses the information field to obtain the benefits of natural substances and medications in their “pure” informational form, offering side-effect-free remedies for health and well-being.

Massimo Citro: Massimo Citro, M.D., is a medical doctor specializing in psychotherapy and the discoverer of pharmacological frequency transfer (TFF). He is a member of the Club of Budapest, is the founder and director of the Alberto Sorti Research Institute (IDRAS), and also has a degree in literature. He lives in Torino, Italy.Ervin Laszlo is a philosopher and systems scientist. Twice nominated for the Nobel Peace Prize, he has published more than 75 books and over 400 articles and research papers. The subject of the one-hour PBS special Life of a Modern-Day Genius, Laszlo is the founder and president of the international think tank the Club of Budapest and of the prestigious Laszlo Institute of New Paradigm Research. The winner of the 2017 Luxembourg Peace Prize, he lives in Tuscany. In 2019, Ervin Laszlo was cited as one of the "100 Most Spiritually Influential Living People in the World" according to Watkins Mind Body Spirit magazine.