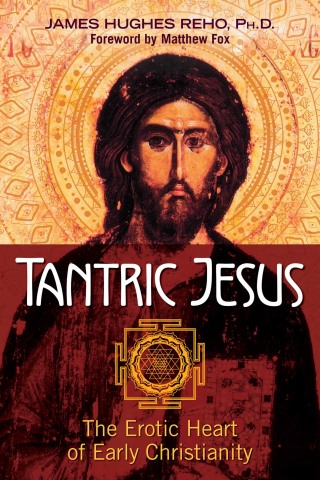 A guide to the history and modern practice of transformative Christianity

• Provides step-by-step instructions for a series of Christian tantric practices, including a partnered sexual practice, mantra and energy work, eye gazing, and work with icons

Unbeknownst to many, the original Christian spirituality as practiced in the early church and by Jesus himself was a tantric spirituality. In the West, Tantra often evokes images of arcane rituals or acrobatic sexual positions, while in reality Tantra is a holistic transformative path of life, love, and being--grounded in practice.

Offering a new understanding of Jesus as guru and master of left-handed Tantra, James Reho, an Episcopal priest and tantric initiate, reframes the Christian story and restores to modern Christianity the tantric wisdom practices that were edited out of church tradition and forgotten over the centuries. He explains how tantric Christianity views the human body as the primary “temple” of the Holy, with erotic energy as the signature of Divine Presence within. Rev. Reho reveals the similarities of the earliest Christian practices to the tantric yogas of India and Tibet and explores the role of Kundalini and the chakras. He details how to work with mantras, icons, and pranayama breathing exercises, as well as with gazing as a spiritual practice. Informed by the insights of ancient texts and early masters of Christian spirituality, the author provides step-by-step instructions on how to practice Christian tantric sex with a life-partner of the opposite or same sex.

James Hughes Reho: The Reverend James Hughes Reho, Ph.D., is an ordained Episcopal priest with a Ph.D. in Chemistry from Princeton University. He has served on the staff of Trinity Episcopal Cathedral in Miami, as the Chaplain and Director of Spiritual Formation at the General Theological Seminary in New York City, and currently pastors a Lutheran-Episcopal church in Fort Myers, Florida. A spiritual director and certified yoga instructor, he leads retreats and workshops on yoga, meditation, and tantric practice in both religious and secular settings. He lives in southwest Florida with his wife.Matthew Fox was a member of the Dominican Order in good standing for 34 years until he was expelled by former Pope Joseph Ratzinger, who was a cardinal and chief inquisitor at the time. Matthew Fox is the founder of Wisdom University (formerly the University of Creation Spirituality) and the foremost proponent of Creation Spirituality, based on the mystical teachings of early Christian visionaries such as Hildegard von Bingen, Meister Eckhart, and Saint Thomas Aquinas. He is the author of 26 books, including Original Blessing and The Coming of the Cosmic Christ. In 2019, Matthew Fox was cited as one of the "100 Most Spiritually Influential Living People in the World" according to Watkins Mind Body Spirit magazine.