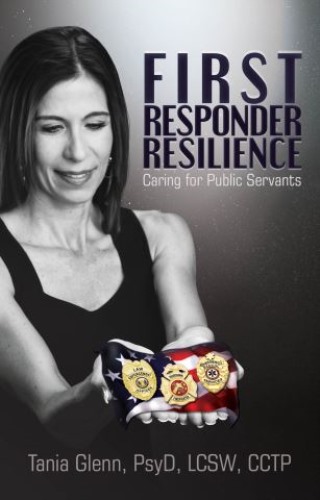 The tradition in emergency services has been to largely ignore mental health. This has never, nor will it ever, work. Recently there has been increased awareness of burnout, Post Traumatic Stress Disorder and first responder suicide. Unfortunately awareness is not enough. Dramatic videos sharing war stories do not offer solutions for these problems. This book is designed to guide the audience towards solutions. Many people have asked me to write this book over the years. It seemed too daunting to me for a long time. After deploying to an active airport shooter situation along with a peer support team that I train and guide clinically, the Director of a large law enforcement organization learned of what we did and deemed our response as "best practice." This is the equivalent of a golden egg or Nobel Prize in my world. This alone spurred me to write the book!

Tania Glenn: Tania was three months from completing her Master's Degree at the University of Texas when she witnessed the dramatic and violent standoff between law enforcement and the Branch Davidian Cult in Waco, Texas. At that point, she knew her calling was to work with first responders and to focus on healing these warriors from the horrors of post-traumatic stress disorder. Tania spent the first ten years of her career working in a Level Two Trauma Emergency Department on weekend nights as she built her private practice during the week. In 2002, Tania transitioned to her private practice on a full-time basis and has dedicated her entire career to working with first responders and military members. Tania assisted with the aftermath of the Oklahoma City Murrah Federal Building bombing, the 9/11 attacks on the World Trade Center, Hurricane Katrina, the Dallas Police shootings, and numerous other incidents. Tania is referred to as the "warrior healer" by her colleagues, and she is passionate about her work. Tania resides in Central Texas. Her loves include her family, her pets and fitness.