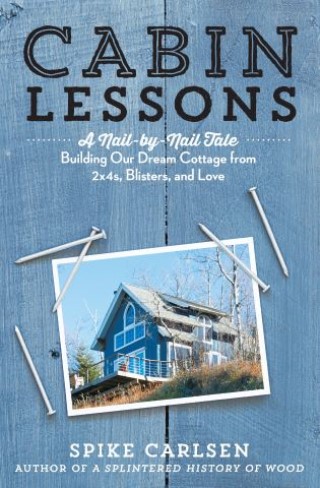 A Nail-by-Nail Tale: Building Our Dream Cottage from 2x4s, Blisters, and Love

A carpenter’s humorous story of building a cabin on Lake Superior with his family—“part how-to, part memoir and part love story” (Minneapolis Star-Tribune).

When carpenter Spike Carlsen and his wife set out, with their recently blended family of five kids, to build a cabin on the north shore of Lake Superior, they quickly realize that painting, parenting, and putting up drywall all come with both frustrations and unexpected rewards.

Blending practical information with lively personal memoir, Cabin Lessons tells the wryly funny, heartwarming story of their eventful journey—from buying an unforgiving plot of land on an eroding cliff to finally enjoying the lakeside hideaway of their dreams.

“Spike Carlsen’s book . . . chronicles the family’s route from a scenic dream (with a modest budget) to designing and building, to filling the space with family, to a (rejected) blank-check purchase offer from a slickster driving an Italian-made car. And it’s all told in the voice of someone you want to see sitting on the other side of the campfire, sharing a blanket with his wife, dispensing charming tales and life lessons.” —Duluth News Tribune (Minnesota)

Spike Carlsen built a tree house at the age of 8 and has been swinging a hammer ever since. He worked as a carpenter and contractor for 15 years, then as an editor with The Family Handyman — the world’s leading DIY magazine — for another 15. He’s the author of the award-winning A Splintered History of Wood, Woodworking FAQ, and The Backyard Homestead of Building Projects. He’s written for Men’s Health, the Minneapolis Star Tribune, American Woodworker, and other publications and has appeared on HGTV, Modern Marvels, and CBS’s The Early Show. He and his wife, Kat, divide their time between their home in Stillwater, Minnesota, and their cabin on Lake Superior.