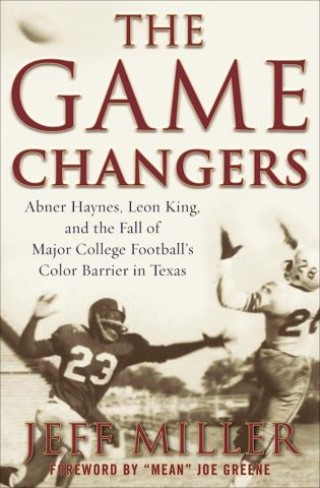 In 1956, in the town of Denton, Texas, two African American football players from Dallas’s segregated public school system boldly walked on to play for what was then called North Texas State College—known today as the University of North Texas. Abner Haynes and Leon King didn’t know what to expect, and neither did their teammates.

The players’ arrival came only a few months after North Texas welcomed its first black undergraduate student. The integration of the school’s most public face—its football team—occurred with neither fanfare nor hostility. But there were tense situations when the integrated team played away games in small, segregated Texas towns. Jeff Miller, a veteran Texas sports journalist, has visited with those who lived through it, and recounts their stories—from the mixed welcome that Haynes and King initially received from their white freshman teammates to those same teammates standing with them after being denied service at eateries on the road to a squad that grew into a Bowl team.

In The Game Changers, Miller ties the tale of what happened at North Texas beginning in 1956 to contrasting events that took place not far away that reverberated into national relevance.

“Kudos to Jeff Miller for telling the story of the two young men who integrated major college football in Texas, the beginning of the end of a shameful period in football history.” —Michael Oriard, former lineman for the Kansas City Chiefs

Jeff Miller: Jeff Miller has been involved in sports journalism in North Texas since 1987 with stops that have included the Dallas Morning News, CBS Sports and ESPN. The Game Changers is his sixth book. Miller and his wife, Frances, live in DeSoto, Texas. They have four children.