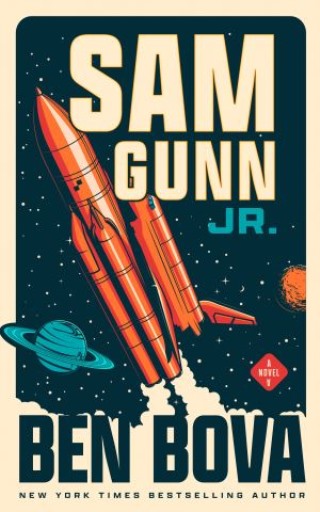 Intergalactic explorer, venture capitalist, and Casanova Sam Gunn may be gone, but his legacy lives on in his son, Sam Gunn Jr.

In his first-ever adventure, Sam Gunn Jr. sets off to fulfill his father’s left-behind mission of interplanetary enterprising. He soon learns his father’s shoes are tough to fill, but he is up for the task. Junior takes a journey through the stars, falling in love with beautiful women and leaving his unique mark everywhere he ventures. Soon, however, this trip through the universe takes a dangerous turn when Junior lands on Saturn and learns about a recent scientific discovery that will change everything, possibly forever.

Will he be able to save the universe and live up to his father’s name? Take an unforgettable ride through space in master sci-fi author Ben Bova’s exciting novel!

Ben Bova (1932–2020) was the author of more than a hundred works of science fact and fiction, including Able One, Transhuman, Orion, and Titan, winner of John W. Campbell Memorial Award for Best Novel. His many honors include the Isaac Asimov Memorial Award, the Lifetime Achievement Award of the Arthur C. Clarke Foundation, the Robert A. Heinlein Award, and six Hugo Awards. Dr. Bova was a past president of the Science Fiction and Fantasy Writers of America and president emeritus of the National Space Society. In addition to writing, he was the editor of Analog and the fiction editor of Omni. He worked for Project Vanguard, America’s first artificial satellite program, and for the company that created the heat shields for Apollo 11. He taught science fiction at Harvard University and worked with such filmmakers as George Lucas and Gene Roddenberry.