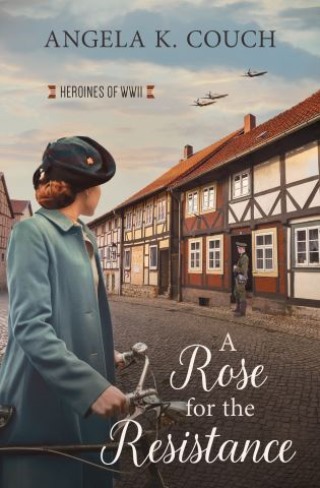 A Rose for the Resistance

A French Woman and German Soldier Create a Truce

Full of intrigue, adventure, and romance, this new series celebrates the unsung heroes—the heroines of WWII.

With her father in a German POW camp and her home in Ste Mere Eglise, France, under Nazi occupation, Rosalie Barrieau will do anything to keep her younger brother safe. . .even from his desire to join the French resistance. Until she falls into the debt of a German solder—one who delivers a wounded British pilot to her door. Though not sure what to make of her German ally, Rosalie is thrust deep into the heart of the local underground. As tensions build toward the allied invasion of Normandy, she must decide how much she is willing to risk for freedom.

Other books in the series you may also enjoy:
The Cryptographer’s Dilemma by Johnnie Alexander
Picture of Hope by Liz Tolsma
Saving Mrs. Roosevelt by Candice Sue Patterson
Mrs. Witherspoon Goes to War by Mary Davis

Angela K Couch:
To keep from freezing in the great white north, Angela K Couch cuddles under quilts with her laptop. Winning short story contests, being a semi-finalist in ACFW’s Genesis Contest, and a finalist in the 2016 International Digital Awards also helped warm her up. As a passionate believer in Christ, her faith permeates the stories she tells. Her martial arts training, experience with horses, and appreciation for good romance sneak in as well. When not writing, she stays fit (and toasty warm) by chasing after five munchkins.