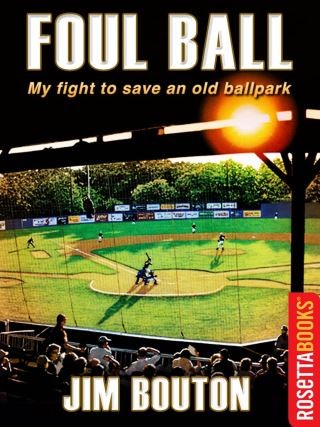 A rollicking and “compelling” true story of baseball, big money, and small-town politics by the author of the classic Ball Four (Publishers Weekly).

Host to organized baseball since 1892, Pittsfield, Massachusetts’s Wahconah Park was soon to be abandoned by the owner of the Pittsfield Mets, who would move his team to a new stadium in another town—an all too familiar story. Enter former Yankee pitcher Jim Bouton and his partner with the best deal ever offered to a community: a locally owned professional baseball team and a privately restored city-owned ballpark at no cost to the taxpayers.

The only people who didn’t like Bouton's plan were the mayor, the mayor's hand-picked Parks Commissioners, a majority of the City Council, the only daily newspaper, the city’s largest bank, its most powerful law firm, and a guy from General Electric. Everyone else—or approximately 98% of the citizens of Pittsfield—loved it. But the “good old boys” hated Bouton’s plan because it would put a stake in the heart of a proposed $18.5 million baseball stadium—a new stadium that the citizens of Pittsfield had voted against three different times. In this riveting account, Bouton unmasks a mayor who brags that “the fix is in,” a newspaper that lies to its readers, and a government that operates out of a bar.

But maybe the most incredible story is what happened after Foul Ball was published—a story in itself. Invited back by a new mayor, Bouton and his partner raise $1.2 million, help discover a document dating Pittsfield’s baseball origins to 1791, and stage a vintage game that’s broadcast live by ESPN-TV.

Who could have guessed what would happen next? And that this time it would involve the Massachusetts Attorney General?

“An irresistible story whose outcome remains in doubt until the very end. Not just a funny book, but a patriotic one.”—San Francisco Chronicle

“Bouton proves that a badly run city government can be just as dangerous—and just as hilarious—as a badly run baseball team.”—Keith Olbermann