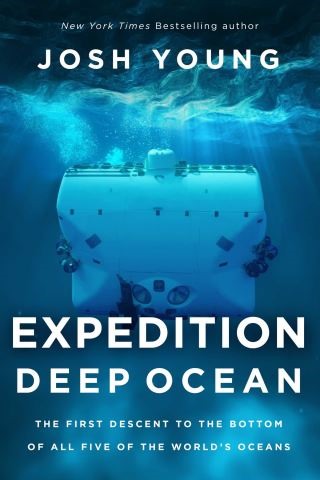 The First Descent to the Bottom of the World's Five Oceans

The riveting story of the exploration of the final frontier of our planet—the deep ocean—and history-making mission to reach the bottom of all five seas.

Humankind has explored every continent on earth, climbed its tallest mountains, and gone into space. But the largest areas of our planet remain largely a mystery: the deep oceans. At over 36,000 feet deep, there areas closest to earth’s core have remained nearly impossible to reach—until now.

Technological innovations, engineering breakthroughs and the derring-do of a team of explorers, led by explorer Victor Vescovo, brought together an audacious global quest to dive to the deepest points of all five oceans for the first time in history.

The expedition pushed technology to the limits, mapped hidden landscapes, discover previously unknown life forms and began to piece together how life in the deep oceans effects our planet—but it was far from easy.

Expedition Deep Ocean is the inside story of this exploration of one of the most unforgiving and mysterious places on our planet, including the site of the Titanic wreck and the little-understood Hadal Zone.

Vescovo and his team would design the most advanced deep-diving submersible ever built, where the pressure on the sub is 8 tons per square inch—the equivalent of having 292 fueled and fully loaded 747s stacked on top of it. And then there were hurricane-laden ocean waters and the byzantine web of global oceanography politics.

Expedition Deep Ocean reveals the marvelous and other-worldly life found in all five deep ocean trenches, including several new species that have posed as of yet unanswered questions about survival and migration from ocean to ocean. Then there are the newly discovered sea mounts that cause tsunamis when they are broken by shifting subduction plates and jammed back into the earth crust, something that can now be studied to predict future disasters.

Filled with high drama, adventure and the thrill of discovery, Expedition Deep Ocean celebrates courage and ingenuity and reveals the majesty and meaning of the deep ocean.

Josh Young: Josh Young is author or co-writer of more than twenty books, including five New York Times bestsellers. His books include Here’s the Deal: Don’t Touch Me with Howie Mandel, Erasing Death with Dr. Sam Parnia, Epic Survival with Matt Graham, You’re Only as Good as Your Next One with Mike Medavoy, and Bob Newhart’s I Shouldn’t Even Be Doing This.