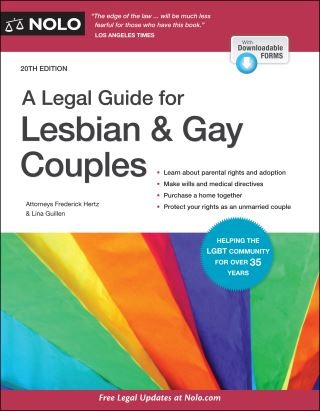 Same-sex marriage is legal nationwide, but there are still unresolved issues faced by unmarried LGBT couples, including federal non-recognition of civil unions and domestic partnerships and uncertain parentage and adoption laws—A Legal Guide for Lesbian & Gay Couples addresses all of these issues and more.

Frederick Hertz: Frederick Hertz is a practicing attorney-mediator and the author of other Nolo books including, A Legal Guide for Lesbian & Gay Couples, Living Together: A Legal Guide for Unmarried Couples, and Making It Legal: A Guide to Same-Sex Marriage, Domestic Partnership & Civil Unions. You can visit Frederick's website at http://www.frederickhertz.com.|||Lina Guillen is a trial attorney, with over 15 years of experience in a wide range of legal matters, including family law and civil litigation. As Nolo’s Family Law Legal Editor, Lina has edited a variety of Nolo books, written numerous legal articles on divorce and family law issues, and managed the development of legal content on several Nolo websites. In addition to being the coauthor of Neighbor Law, and Divorce & Money: How to Make the Best Financial Decisions During Divorce, Lina has been quoted in several publications, including New York Times, U.S. News, Real Simple Magazine, and How Stuff Works. Lina is an active member of the California State Bar and received her law degree from the University of California, Hastings College of the Law. Before law school, she was an editorial assistant for The Press Democrat newspaper in Sonoma County.