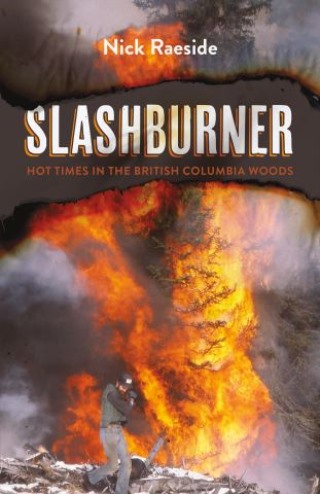 Nick Raeside worked at many jobs in the logging business but the one that he specialized in was starting fires—small, (hopefully) controlled fires used to clean up logging slash or debris-laden sites left after the merchantable timber had been removed. It was a crude way of reducing fire hazard and clearing the ground for replanting, and there was a constant danger that the controlled burns would get away and become real wildfires, destroying millions of dollars’ worth of standing timber. Raeside found this challenge irresistible.

In Slashburner, Raeside recounts many hilarious anecdotes from his career in the woods during the 1970s, ’80s and ’90s, when he and his slashburning crews rampaged throughout southeastern BC armed with drip torches, chainsaws and explosives. They lit fires. They put some of them out. They survived rockslides, animal encounters and flare fights. Slashburner is a rollicking tale, capturing the good old times in the logging business, when danger and excitement were the order of the day and almost everyone you met was a memorable character.

Nick Raeside was seven years old when he fought his first fire—barefoot—in New Zealand. After upgrading to sandals, learning to make napalm on the kitchen stove and moving to Canada, he headed straight for the woods. He worked a variety of jobs including forest firefighter, land surveyor’s chainman, forestry official and, of course, slashburner. This is his first book. He lives in Nanoose Bay, BC.