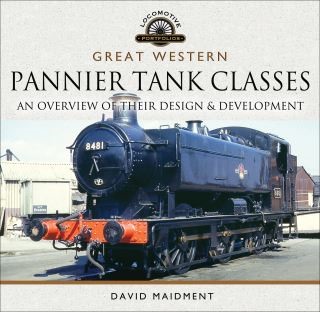 An Overview of Their Design & Development

Though hauling freight was a vital part of Great Western Railway’s history—and where it made the majority of its profit—there are few books devoted to the stout, powerful engines that did the work. In Great Western, Pannier Tank Classes, British Railways expert David Maidment corrects that oversight. This volume explores the large number of 0-6-0 saddle tanks built for both the Great Western Railway and the independent railway companies in South Wales, most of which were converted to pannier tanks in the Churchward and Collett eras.

While covering the Armstrong and Dean engines in detail, Maidment goes on to describe the design, construction and operation of the largest class of steam engines built in the UK in the last century: Charles Collett’s GWR 5700 class, examples of which were still being built after nationalization. Collett also designed pannier tank engines for branch passenger and freight work, and his successor Frederick Hawksworth continued the GW tradition with a tapered boiler version. All of these are discussed in depth in terms of their design and service. A concluding chapter covers further designs that were never built.