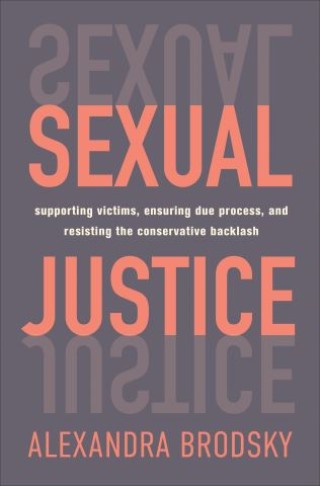 Supporting Victims, Ensuring Due Process, and Resisting the Conservative Backlash

A pathbreaking work for the next stage of the #MeToo movement, showing how we can address sexual harms with fairness to both victims and the accused, and exposing the sexism that shapes today's contentious debates about due process

Over the past few years, a remarkable number of sexual harassment victims have come forward with their stories, demanding consequences for their assailants and broad societal change. Each prominent allegation, however, has also set off a wave of questions – some posed in good faith, some distinctly not – about the rights of the accused. The national conversation has grown polarized, inflamed by a public narrative that wrongly presents feminism and fair process as warring interests.

Sexual Justice is an intervention, pointing the way to common ground. Drawing on core principles of civil rights law, and the personal experiences of victims and the accused, Alexandra Brodsky details how schools, workplaces, and other institutions can – indeed, must – address sexual harms in ways fair to all. She shows why these allegations cannot be left to police and prosecutors alone, and outlines the key principles of fair proceedings outside the courts. Brodsky explains how contemporary debates continue the long, sexist history of “rape exceptionalism,” in which sexual allegations are treated as uniquely suspect. And she calls on readers to resist the anti-feminist backlash that hijacks the rhetoric of due process to protect male impunity.

Vivid and eye-opening, at once intellectually rigorous and profoundly empathetic, Sexual Justice clears up common misunderstandings about sexual harassment, traces the forgotten histories that underlie our current predicament, and illuminates the way to a more just world.

Alexandra Brodsky: Alexandra Brodsky is a civil rights lawyer with deep ties to the student movement to end campus gender violence. She holds a J.D. from Yale Law School and clerked for the Honorable Marsha S. Berzon on the U.S. Court of Appeals for the Ninth Circuit. Brodsky has written about sexual assault for the New York Times, the Guardian, the Washington Post, and the Atlantic, among many other publications. She lives in New York.