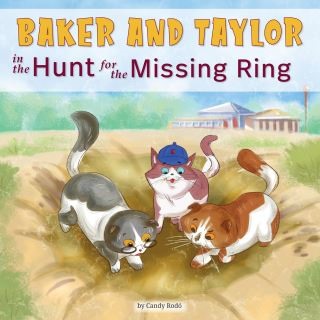 Baker and Taylor: The Hunt for the Missing Ring

Everyone’s favorite library cats are on the road again! Baker and Taylor are in the windy city to help Taylor’s cousin Jordan find a precious family heirloom.

The next stop on Baker and Taylor’s literary road trip: Chicago. But, before they can get any library lounging done, they’re bent on helping Taylor’s cousin Jordan find their grandmother’s golden ring, a gift that she’s misplaced. As they retrace Jordan’s steps in search of the ring, they find themselves on an impromptu sightseeing extravaganza that leads them to the most unexpected discovery.

Facts on Chicago and its landmarks are dispersed throughout.

Candy Rodó: Formerly a journalist, Candy Rodó has been working in educational publishing for over two decades. She authored and edited the Everyday Learning Fun series, an Academics’ Choice Smart Book Award winner, and recently contributed to a series of classic story retellings in graphic novel format called DSI Graphic Novels, as well as a culturally informed Spanish series of picture books for young children. As a native Spanish speaker, Candy is dedicated to the literacy skills of English Language Learners.