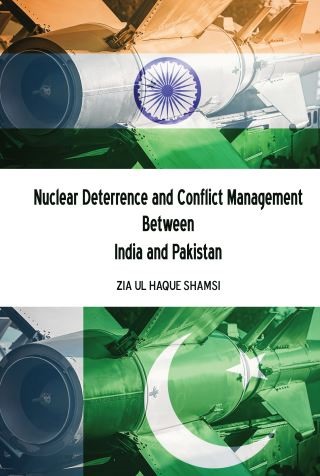 Nuclear Deterrence and Conflict Management Between India and Pakistan

The India-Pakistan relationship is complex and choreographed with wars, protracted conflicts and active disputes. Although the presence of nuclear weapons has decreased the probability of an all-out conventional war, the frequency of minor conflicts and crises have increased manifold. India considers nuclear weapons a deterrent against nuclear strikes, whereas Pakistan assumes that these would deter a nuclear as well as a conventional war. The central argument of this book is that another military engagement between India and Pakistan, similar to one in February 2019, exists with varying degrees of probability, thus challenging the efficacy of nuclear deterrence. Until the probabilities of military engagements are minimized, the possibilities of peace and stability in the region would remain elusive. Therefore, the situation asks for scholarly contribution in developing a new paradigm wherein the two nuclear neighbors are made to recognize the need to resolve their disputes instead of just managing them, to avoid recurrence of violent conflicts that can lead to a catastrophic nuclear exchange, no matter how limited it is.