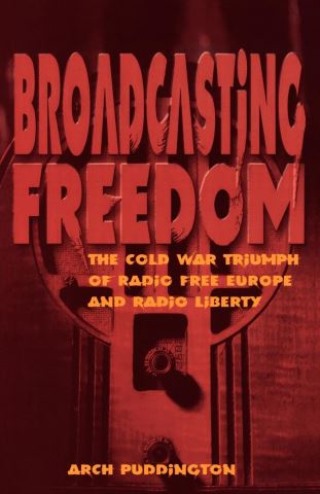 Among America's most unusual and successful weapons during the Cold War were Radio Free Europe and Radio Liberty. RFE-RL had its origins in a post-war America brimming with confidence and secure in its power. Unlike the Voice of America, which conveyed a distinctly American perspective on global events, RFE-RL served as surrogate home radio services and a vital alternative to the controlled, party-dominated domestic press in Eastern Europe. Over twenty stations featured programming tailored to individual countries. They reached millions of listeners ranging from industrial workers to dissident leaders such as Lech Walesa and Vaclav Havel.

Broadcasting Freedom draws on rare archival material and offers a penetrating insider history of the radios that helped change the face of Europe. Arch Puddington reveals new information about the connections between RFE-RL and the CIA, which provided covert funding for the stations during the critical start-up years in the early 1950s. He relates in detail the efforts of Soviet and Eastern Bloc officials to thwart the stations; their tactics ranged from jamming attempts, assassinations of radio journalists, the infiltration of spies onto the radios' staffs, and the bombing of the radios' headquarters.

Puddington addresses the controversies that engulfed the stations throughout the Cold War, most notably RFE broadcasts during the Hungarian Revolution that were described as inflammatory and irresponsible. He shows how RFE prevented the Communist authorities from establishing a monopoly on the dissemination of information in Poland and describes the crucial roles played by the stations as the Berlin Wall came down and the Soviet Union broke apart.

Broadcasting Freedom is also a portrait of the Cold War in America. Puddington offers insights into the strategic thinking of the RFE-RL leadership and those in the highest circles of American government, including CIA directors, secretaries of state, and even presidents.