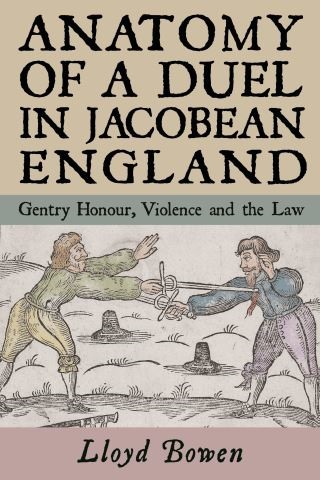 Anatomy of a Duel in Jacobean England

Gentry Honour, Violence and the Law

This book offers an analysis of Jacobean duelling and gentry honour culture through the close examination and contextualisation of the most fully documented duel of the early modern era. This was the fatal encounter between a Flintshire gentleman, Edward Morgan, and his Cheshire antagonist, John Egerton, which took place at Highgate on 21 April 1610. John Egerton was killed, but controversy quickly erupted over whether he had died in a fair fight of honouror had been murdered in a shameful conspiracy. The legal investigation into the killing produced a rich body of evidence which reveals in unparalleled detail not only the dynamics of the fight itself, but also the inner workingsof a seventeenth-century metropolitan manhunt, the Middlesex coroner's court, a murder trial at King's Bench, and also the murky webs of aristocratic patronage at the Jacobean Court which ultimately allowed Morgan to secure a pardon.

Uniquely, a series of dramatic Star Chamber suits have survived that also allow us to investigate the duel's origins. Their close examination, as Lloyd Bowen shows, calls into question the historiographical paradigm which sees early modern duels as matters of the moment and distinct from, as opposed to connected to, the gentry feud. The book throws much new light on questions of gentry honour, the nature and prevalence of early modern eliteviolence, and the process of judicial investigation in Shakespeare's England.