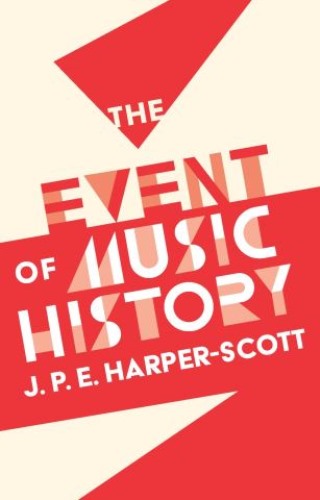 The Event of Music History

This book presents a new theory of how to write music history, and offers an exemplar of this new theory in action, in a series of four chapter-length reflexions on Beethoven's heroic style. The first book-length theory of music history since Carl Dahlhaus's Foundations of Music History, it brings musicology to the cutting edge of debates in the postmodern philosophy of history.

While the book engages with current thinking, it also goesfurther than the postmodern critique of history writing to find a new and positive basis for the writing of music history. In so doing the book revisits the philosophy of Alain Badiou: in place of a focus on the facts, the objects of history, whose problematic relation to history writing the theorists have demonstrated, the book proposes a focus instead on the subjects of history, the 'faithful', 'reactive, and 'obscure' responses to an 'Event' (a kind of rapture of ontology which brings the actors involved closer to a truth). It sees musical materials (the styles, techniques, and musical 'language' handed down to composers by history) in a dialectical relationship with the human beings who are music's manifold historical actors.

Engagingly written, this new short theory of music history will be essential reading for scholars and students of the many area studies within music history. It will also attract those of neighbouring disciplines dealing with the philosophy of history or the history of historiography.

J. P. E. Harper-Scott is Professor of Music History and Theory at Royal Holloway, University of London, and General Editor of the Cambridge University Press series, 'Music in Context'. His work focuses on an examination of music's cultural, personal, and interpersonal significance since around 1800. It draws extensively on philosophical, cultural, and social theory and the explanatory resources of music theory, and espouses an explicitly Leftist perspective. He is the author of numerous books and articles, including Ideology in Britten's Operas (2018), The Quilting Points of Musical Modernism (2012), and Edward Elgar, Modernist (2006). He has edited essay collections with Julian Rushton (Elgar Studies, 2007) and Jim Samson (An Introduction to Music Studies, 2009), and a volume of Wagner Studies, edited with Steven Vande Moortele, is under contract to Cambridge University Press.