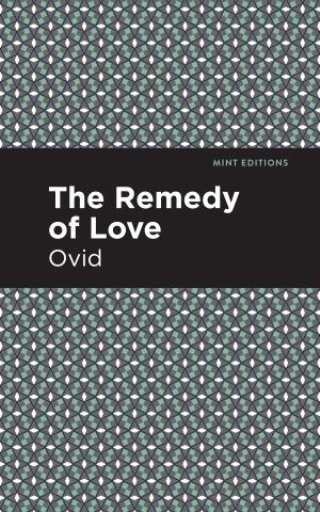 The Remedy of Love

“The first taste I had for books came to me from my pleasure in the fables of the Metamorphoses of Ovid. For at about seven or eight years of age I would steal away from any other pleasure to read them, inasmuch as this language was my mother tongue, and it was the easiest book I knew and the best suited by its content to my tender age.” –Michel de Montaigne

Remedia Amoris; or, The Remedy of Love (2 AD) is an instructional poem by Ovid. A sequel to his three book poem Ars Amatoria; or, The Art of Love (2 AD), Remedia Amoris; or, The Remedy of Love was immensely popular—if a little controversial—in its time, and has survived numerous charges of indecency over the centuries. For the modern reader, it should prove a surprisingly relatable work on intimacy and relationships from an author of the ancient world.

While Ars Amatoria; or, The Art of Love offers salient advice on such topics as etiquette, remembering birthdays, avoiding unhealthy jealousy, being open to older and younger lovers, and nurturing honesty, Remedia Amoris; or, The Remedy of Love takes as its subject the unfortunate—yet common—experience of love gone bad. Perhaps concerned for eager readers of his first work on romance, Ovid provides suggestions to novice lovers on how to escape a bad relationship and on what to do in the event of incurable unhappiness. In order to avoid the tragic fates of Dido or Medea, both of whom were led to early graves by unfaithful lovers, Ovid suggests such healthy behaviors as staying busy, seeing the world, abstaining from alcohol, and trying not to ruminate on the love one has left behind. Remedia Amoris; or, The Remedy of Love, although frequently tongue-in-cheek, is an earnest and effective attempt to caution the overeager romantic and console those unlucky in love.

With a beautifully designed cover and professionally typeset manuscript, this edition of Ovid’s Remedia Amoris; or, The Remedy of Love is a classic work of Roman literature reimagined for modern readers.