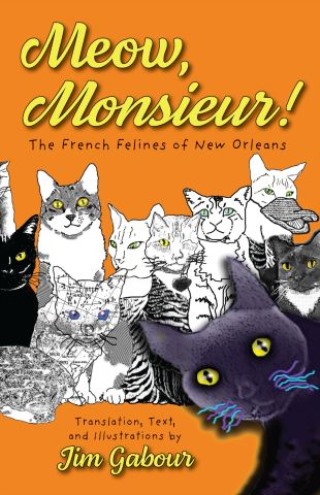 The French Felines of New Orleans

Quirky vignettes tell the stories about various New Orleans cats, their lives, and the humans they interact with. The author is a writer, producer, and film director.

Jim Gabour: Jim Gabour lives in Faubourg Marigny with six and a half cats. In 2000, he produced and directed The Master Gardener Show for Kelsey Grammar. He would later produce and direct two Norah Jones concert DVDs. He also directed the Fiftieth Anniversary of Rock and Roll sponsored by the National Academy of Arts and Sciences. In 2009, he produced and directed the twenty-fifth anniversary tour film for Spinal Tap. He has been a contributing writer for the International Edition of the Guardian newspaper and website since January 2019 and a featured writer since 2015. In 2017, he retired from his position as the director of the digital filmmaking program at Loyola University New Orleans. He continues to produce and direct large-scale film productions.