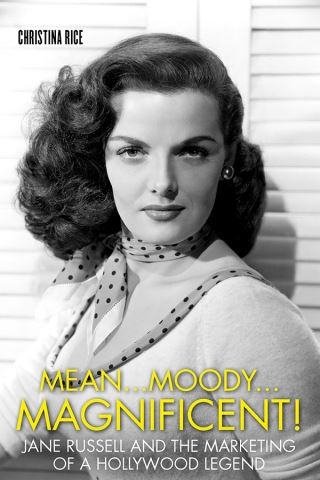 Jane Russell and the Marketing of a Hollywood Legend

By the early 1950s, Jane Russell (1921–2011) should have been forgotten. Her career was launched on what is arguably the most notorious advertising campaign in cinema history, which invited filmgoers to see Howard Hughes's The Outlaw (1943) and to "tussle with Russell." Throughout the 1940s, she was nicknamed the "motionless picture actress" and had only three films in theaters. With such a slow, inauspicious start, most aspiring actresses would have given up or faded away. Instead, Russell carved out a place for herself in Hollywood and became a memorable and enduring star.

Christina Rice offers the first biography of the actress and activist perhaps most well-known for her role in Gentlemen Prefer Blondes (1953). Despite the fact that her movie career was stalled for nearly a decade, Russell's filmography is respectable. She worked with some of Hollywood's most talented directors—including Howard Hawks, Raoul Walsh, Nicholas Ray, and Josef von Sternberg—and held her own alongside costars such as Marilyn Monroe, Robert Mitchum, Clark Gable, Vincent Price, and Bob Hope. She also learned how to fight back against Howard Hughes, her boss for more than thirty-five years, and his marketing campaigns that exploited her physical appearance.

Beyond the screen, Rice reveals Russell as a complex and confident woman. She explores the star's years as a spokeswoman for Playtex as well as her deep faith and work as a Christian vocalist. Rice also discusses Russell's leadership and patronage of the WAIF foundation, which for many years served as the fundraising arm of the International Social Service (ISS) agency. WAIF raised hundreds of thousands of dollars, successfully lobbied Congress to change laws, and resulted in the adoption of tens of thousands of orphaned children. For Russell, the work she did to help unite families overshadowed any of her onscreen achievements.

On the surface, Jane Russell seemed to live a charmed life, but Rice illuminates her darker moments and her personal struggles, including her empowered reactions to the controversies surrounding her films and her feelings about being portrayed as a sex symbol. This stunning first biography offers a fresh perspective on a star whose legacy endures not simply because she forged a notable film career, but also because she effectively used her celebrity to benefit others.

Christina Rice: Christina Rice is a librarian and archivist at the Los Angeles Public Library. She lives in North Hollywood, California. (www.anndvorak.com)