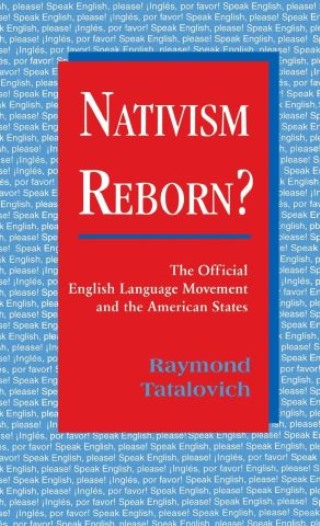 The Official English Language Movement and the American States

In July 1992 Senator Robert C. Byrd (D-WV) angrily suggested during floor debate... that the United States should not continue accepting immigrants mho speak no English. "I pick up the telephone and call the local garage," Byrd said. "I can't understand the person on the other side of the line. I'm not sure he can understand me. They're all over the place, and they don't speak English. We want more of this?" Later he apologized for the remark, saying, "I regret that in the heat of the moment I spoke unwisely."

Is America in the midst of another backlash against foreigners? In the wide-ranging controversy over multiculturalism that has generated much heat in recent years, one of the most volatile issues is whether the United States should reflect a dominant English-speaking majority or encourage a multilingual culture.

Tied up with this emotional issue is a growing anxiety on the part of many Americans about the new wave of non-European immigrants. "It is not without significance," says S.I. Hayakawa, who was a founder of U.S. English, "that pressure against English language legislation does not come from any immigrant group other than the Hispanic: not from the Chinese or Koreans or Filipinos or Vietnamese; nor from immigrant Iranians, Turks, Greeks, East Indians, Ghanians, Ethiopians, Italians, or Swedes."

Raymond Tatalovich has conducted the first detailed, systematic, and empirical study of the official English movement in the United States, seeking answers to two crucial questions: What motivations underlie the agitation for official English? Does the movement originate at the grassroots level or is it driven by elites?

His analysis is based on an eclectic range of sources, from historical documents, legal records, and court decisions to news accounts and interviews. In many southern states where the issue has recently assumed prominence, he found that support for the initiative is identified as a residue of nativism. Tatalovich empirically shows linkage between support today for official English and opposition in the South to immigration in the 1920s.

This study not only is definitive but also is a dispassionate analysis of an issue that seems destined to become even more controversial in the next few years. It makes a notable contribution to the current debate over multiculturalism and will be of special interest to sociologists, historians of contemporary social history, linguists, legal scholars, and political scientists who study public policy, minority politics, and comparative state politics.