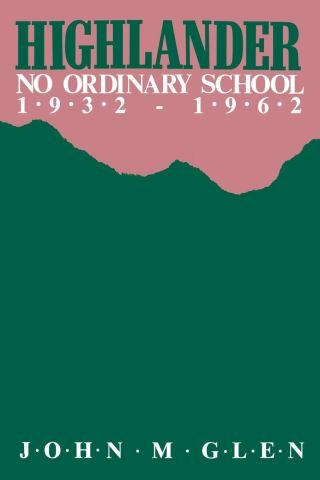 and racial justice during a critical era in southern and Appalachian history. This volume is the first comprehensive examination of that extraordinary—and often controversial—institution.

Founded in 1932 by Myles Horton and Don West near Monteagle, Tennessee, this adult education center was both a vital resource for southern radicals and a catalyst for several major movements for social change. During its thirty-year history it served as a community folk school, as a training center for southern labor and Farmers' Union members, and as a meeting place for black and white civil rights activists. As a result of the civil rights involvement, the state of Tennessee revoked the charter of the original institution in 1962.

At the heart of Horton's philosophy and the Highlander program was a belief in the power of education to effect profound changes in society. By working with the knowledge the poor of Appalachia and the South had gained from their experiences, Horton and his staff expected to enable them to take control of their own lives and to solve their own problems.

John M. Glen's authoritative study is more than the story of a singular school in Tennessee. It is a biography of Myles Horton, co-founder and long-time educational director of the school, whose social theories shaped its character. It is an analysis of the application of a particular idea of adult education to the problems of the South and of Appalachia. And it affords valuable insights into the history of the southern labor and the civil rights movements and of the individuals and institutions involved in them over the past five decades.