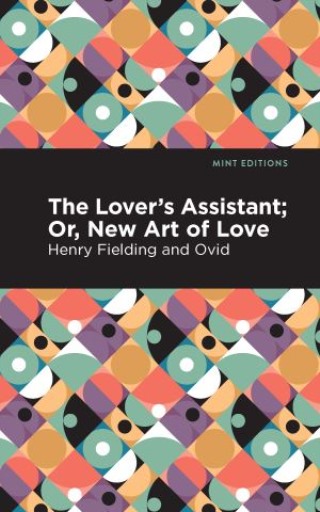 “The first taste I had for books came to me from my pleasure in the fables of the Metamorphoses of Ovid. For at about seven or eight years of age I would steal away from any other pleasure to read them, inasmuch as this language was my mother tongue, and it was the easiest book I knew and the best suited by its content to my tender age.” –Michel de Montaigne

The Lover’s Assistant; or, New Art of Love (1760) is an updated translation of Ovid’s Ars Amatoria; or, The Art of Love (2 AD) by English satirist Henry Fielding. Divided into three books, Ars Amatoria; or, The Art of Love was immensely popular—if a little controversial—in its time, and has survived numerous charges of indecency over the centuries. For the modern reader, it should prove a surprisingly relatable work on intimacy from an author of the ancient world. Fielding’s translation, of the first book alone, remains true to Ovid’s Latin while updating its examples and historical context for the contemporary English reader.

At times serious, at others humorous, The Lover’s Assistant; or, New Art of Love uses a mix of down-to-earth examples and relatable references to mythology in order to offer salient advice for the reader longing for love. Maintaining much of Ovid’s content, Fielding replaces the context of the poem—ancient Rome—with that of his contemporary England. Topics include etiquette, remembering birthdays, avoiding unhealthy jealousy, being open to older and younger lovers, and nurturing honesty. With his wry wit and clear-eyed sense of English aristocratic life, Fielding—who is seen as a pioneer of English literature for his work, including the comic novel Tom Jones (1749)—provides a loyal reinterpretation of Ovid’s classic study of romance between men and women. The Lover’s Assistant; or, New Art of Love, although frequently tongue-in-cheek, is an earnest and effective attempt to enlighten and encourage its readers to partake—responsibly—in one of life’s greatest pleasures.

With a beautifully designed cover and professionally typeset manuscript, this edition of Ovid’s The Lover’s Assistant; or, New Art of Love is a classic work of Roman literature reimagined for modern readers.