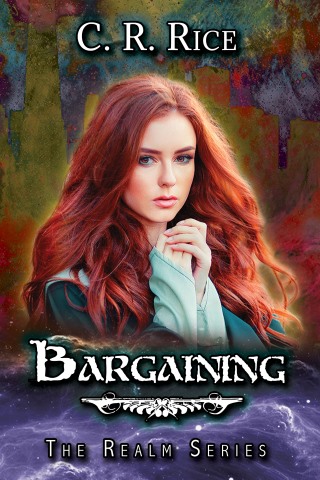 There is a storm brewing in the Realm. It has been three months since Averie and the Rebellion took back the castle. Three months of silence, three months of rebuilding and continued prosperity, but all good things must come to an end. On the night of the Star Ball, Marcus makes his appearance on the steps of the castle and he’s ready to talk. While Averie is ready to toss him into the dungeon to be forgotten, Marcus steps forward with the deal of a lifetime: spare his life and he will share three of his ultimate secrets, including the identity of The Shadow. Her mother always told her that if something seemed too good to be true, that’s because often it was, but when you are offered the answer to the ultimate questions, what would else can you do?

C.R. Rice: I am a fantasy/sci-fi writer, currently immersing you in the Realm Series. As someone who grew up in a small town, I have always loved escaping into the world of fantasy, paranormal and legend. I have dedicated myself to create that same escape for anyone who wants to escape the boring reality of real life. Through the years, I have traveled to dozens of different states and countries. Plus, I have lived in North Carolina, Pennsylvania and now Florida! While they all have their own unique treasures, I must admit to favoring the sunny southern states over the chilly northern ones, though there is nothing like curling up with a good book by the fire as the snow falls outside the window. Some of my favorite reads are Terry Pratchett’s Disc World series, The Uglies Series by Scott Westerfeld, and The Hallow Kingdom by Clare B Dunkle. When I am not reading or writing I enjoy teaching and learning from my mini-superhero three-year-old and spending time with my husband by the pool.