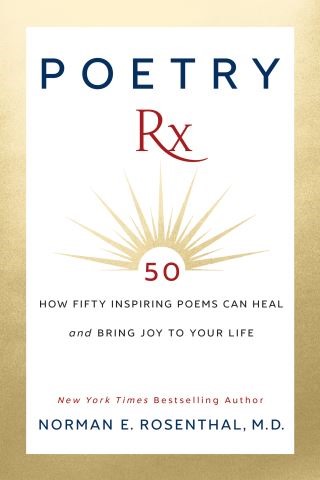 "I used to believe that poetry did not “speak” to me, but I now see how wrong I was. I lived for 44 years with a husband, a lyricist, whose beautifully crafted, heartfelt lyrics touched my every fiber and continue to uplift and inspire me a decade after his death. The special beauty of Dr. Rosenthal’s book for me is his discussion of what each poem is saying, what the poet was likely feeling and often how the poems helped him personally, as when he left his birth family in South Africa for a rewarding career in the United States." - Jane Brody, Author & New York Times Columnist

Poetry to Heal, Inspire and Enjoy

Poetry Rx presents 50 great poems as seen through the eyes of a renowned psychiatrist and New York Times bestseller. In this book, you will find insights into love, sorrow, ecstasy and everything in between: Love in the moment or for a lifetime; love that is fulfilling or addictive; when to break up and how to survive when someone breaks up with you.

Separate sections deal with responses to the natural world, and the varieties of human experience (such as hope, reconciliation, leaving home, faith, self-actualization, trauma, anger, and the thrill of discovery). Other sections involve finding your way in the world and the search for meaning, as well as the final stages of life.

In describing this multitude of human experiences, using vignettes from his work and life, Rosenthal serves as a comforting guide to these poetic works of genius. Through his writing, the workings of the mind, as depicted by these gifted writers speak to us as intimately as our closest friends.

Rosenthal also delves into the science of mind and brain. Who would have thought, for example, that listening to poetry can cause people to have goosebumps by activating the reward centers of the brain? Yet research shows that to be true.

And who were these fascinating poets? In a short biosketch that accompanies each poem, Rosenthal draws connections between the poets and their poems that help us understand the enigmatic minds that gave birth to these masterworks. Altogether, a fulfilling and intriguing must-read for anyone interested in poetry, the mind, self-help and genius.

Norman E. Rosenthal M.D.: Norman E. Rosenthal is a South African author, psychiatrist and scientist who in the 1980s first described winter depression or seasonal affective disorder, and pioneered the use of light therapy for its treatment.