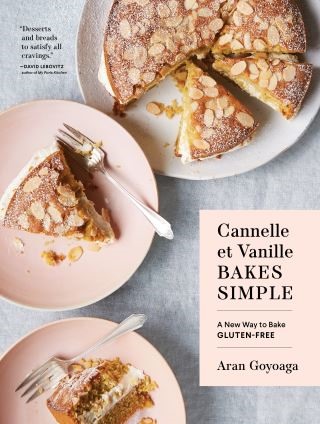 A New Way to Bake Gluten-Free

Aran also shares her gluten-free all-purpose baking mix so you can whip up a batch to keep in your pantry. An added bonus is that each recipe offers dairy-free substitutions and some are naturally vegan as well. With inventive, well-tested, recipes and Aran's clear guidance (plus 145 of her stunning photos), gluten-free baking is happily unfussy, producing irresistibly good results every time.

Aran Goyoaga: ARAN GOYOAGA is a cookbook author, blogger, food stylist, and photographer. Aran was born and raised in the
Basque Country, in northern Spain, where her maternal grandparents owned a pastry shop and her paternal grandparents live off the land. Her blog, Cannelle et Vanille, is a two-time James Beard Award finalist. Her first book, Small Plates & Sweet Treats, was named one of the top cookbooks of 2012 by Sara Moulton on Good Morning America and praised by the New York Times and GOOP. It was featured on Amazon's homepage as a "Pick" for May 2016.

Aran's Instagram is a world-renowned culinary account, lauded by Food & Wine, In Style, The Kitchn, and more. She has a close professional relationship with Amazon Kitchen, Amazon Go, and Amazon Echo and has also partnered with Taittinger, Le Veuve Clicquot, American Express, Kitchen Aid, and Kashi.

She lives in Seattle with her husband and two children.