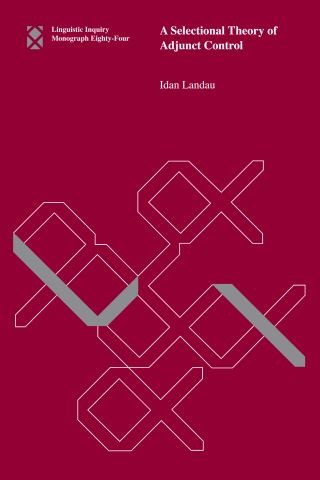 A Selectional Theory of Adjunct Control

A novel, systematic theory of adjunct control, explaining how and why adjuncts shift between obligatory and nonobligatory control.

Control in adjuncts involves a complex interaction of syntax, semantics, and pragmatics, which so far has resisted systematic analysis. In this book, Idan Landau offers the first comprehensive account of adjunct control. Extending the framework developed in his earlier book, A Two-Tiered Theory of Control, Landau analyzes ten different types of adjuncts and shows that they fall into two categories: those displaying strict obligatory control (OC) and those alternating between OC and nonobligatory control (NOC). He explains how and why adjuncts shift between OC and NOC, unifying their syntactic, semantic, and pragmatic properties.

Landau shows that the split between the two types of adjuncts reflects a fundamental distinction in the semantic type of the adjunct: property (OC) or proposition (NOC), a distinction independently detectable by the adjunct's tolerance to a lexical subject. After presenting a fully compositional account of controlled adjuncts, Landau tests and confirms the specific configurational predictions for each type of adjunct. He describes the interplay between OC and NOC in terms of general principles of competition--both within the grammar and outside of it, in the pragmatics and in the processing module--shedding new light on classical puzzles in the acquisition of adjunct control by children. Along the way, he addresses a range of empirical phenomena, including implicit arguments, event control, logophoricity, and topicality.

Idan Landau: Idan Landau is Professor of Linguistics at Ben Gurion University and the author of A Two-Tiered Theory of Control (MIT Press).