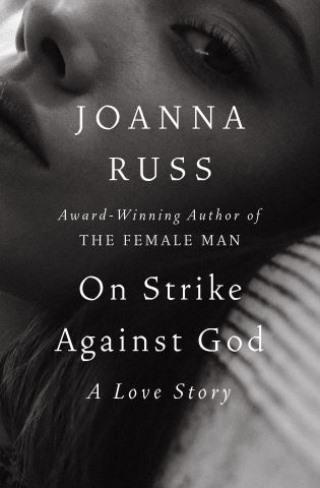 On Strike Against God

A radical novel of love, gender, and being seen for who you are from the groundbreaking author of The Female Man.

Meet Esther, an English professor. Since her divorce more than a decade ago, she has lived in a kind of limbo—a sexless, cold, and self-contained existence. Though surrounded by so-called intellectuals, she is still boxed into life according to her gender, expected to defer to her male colleagues and mocked for her feminist beliefs.

But when Esther’s feelings for her friend Jean take a turn from the platonic to the passionate, a new world opens up before her. Lost in a tumult of lust and happiness, she is unprepared for the patriarchal voices in her own head that threaten to derail her newfound freedom. Societal chaos would ensue if she were to follow her heart. It would open the floodgates to boys wearing pink! And girls, blue! How would the world survive?

In On Strike Against God, Hugo and Nebula Award–winning author Joanna Russ turns from science fiction to 1970s small-town life, where desire simmers in the shadows, rebellion is taking root, and humor becomes a weapon against the status quo.

“A master of putting the truth in fiction, from her SF to her realist work, and On Strike Against God is filled to the brim with honesty.” —Tor.com

“She was brilliant in a way that couldn’t be denied. . . . She was here to imagine, to invent wildly, and to undo the process, as one of her heroines puts it, of ‘learning to despise one’s self.’” —The New Yorker

Joanna Russ:
Joanna Russ (1937–2011) was a radical feminist writer and academic who became one of the seminal figures of science fiction during the 1960s and ’70s, when women began to make major inroads into what had long been a bastion of male authorship. Her best-known novel, The Female Man, is a powerful mix of humor and anger told from the alternating points of view of four women—genetically identical, but coming from different worlds and vastly different societies. Russ wrote five other novels—including the children’s book Kittatinny—and is renowned for her literary criticism and essays. Her short stories appeared in leading science fiction and fantasy magazines and have been widely anthologized as well as collected into four volumes. She received the Nebula Award for her short story “When It Changed” and a Hugo Award for the novella “Souls.”
Russ received a master of fine arts degree from the Yale School of Drama and was a 1974 National Endowment for the Humanities fellow. She was a lecturer at Cornell and other universities and a professor of English at the University of Washington, where she taught from 1984 to 1994. Her scholarly work includes How to Suppress Women’s Writing and To Write Like a Woman, among others. Her papers are collected at the University of Oregon.