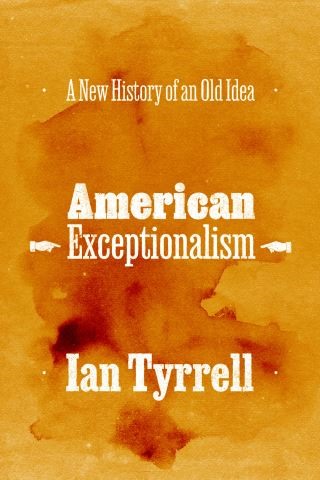 A New History of an Old Idea

A powerful dissection of a core American myth.

The idea that the United States is unlike every other country in world history is a surprisingly resilient one. Throughout his distinguished career, Ian Tyrrell has been one of the most influential historians of the idea of American exceptionalism, but he has never written a book focused solely on it until now. The notion that American identity might be exceptional emerged, Tyrrell shows, from the belief that the nascent early republic was not simply a postcolonial state but a genuinely new experiment in an imperialist world dominated by Britain. Prior to the Civil War, American exceptionalism fostered declarations of cultural, economic, and spatial independence. As the country grew in population and size, becoming a major player in the global order, its exceptionalist beliefs came more and more into focus—and into question. Over time, a political divide emerged: those who believed that America’s exceptionalism was the basis of its virtue and those who saw America as either a long way from perfect or actually fully unexceptional, and thus subject to universal demands for justice. Tyrrell masterfully articulates the many forces that made American exceptionalism such a divisive and definitional concept. Today, he notes, the demands that people acknowledge America’s exceptionalism have grown ever more strident, even as the material and moral evidence for that exceptionalism—to the extent that there ever was any—has withered away.

Ian Tyrrell: Ian Tyrrell is emeritus professor of history at the University of New South Wales and the author of Crisis of the Wasteful Nation: Empire and Conservation in Theodore Roosevelt’s America and Historians in Public: The Practice of American History, 1890–1970, both published by the University of Chicago Press.