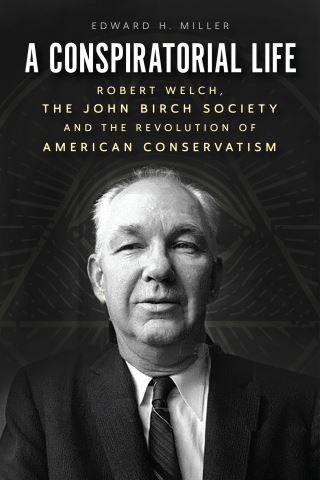 Robert Welch, the John Birch Society, and the Revolution of American Conservatism

The first full-scale biography of Robert Welch, who founded the John Birch Society and planted some of modern conservatism’s most insidious seeds.

Though you may not know his name, Robert Welch (1899-1985)—founder of the John Birch Society—is easily one of the most significant architects of our current political moment. In A Conspiratorial Life, the first full-scale biography of Welch, Edward H. Miller delves deep into the life of an overlooked figure whose ideas nevertheless reshaped the American right.

A child prodigy who entered college at age 12, Welch became an unlikely candy magnate, founding the company that created Sugar Daddies, Junior Mints, and other famed confections. In 1958, he funneled his wealth into establishing the organization that would define his legacy and change the face of American politics: the John Birch Society. Though the group’s paranoiac right-wing nativism was dismissed by conservative thinkers like William F. Buckley, its ideas gradually moved from the far-right fringe into the mainstream. By exploring the development of Welch’s political worldview, A Conspiratorial Life shows how the John Birch Society’s rabid libertarianism—and its highly effective grassroots networking—became a profound, yet often ignored or derided influence on the modern Republican Party. Miller convincingly connects the accusatory conservatism of the midcentury John Birch Society to the inflammatory rhetoric of the Tea Party, the Trump administration, Q, and more. As this book makes clear, whether or not you know his name or what he accomplished, it’s hard to deny that we’re living in Robert Welch’s America.

Edward H. Miller: Edward H. Miller is associate teaching professor at Northeastern University and the author of Nut Country: Right-Wing Dallas and the Birth of the Southern Strategy, also published by the University of Chicago Press.