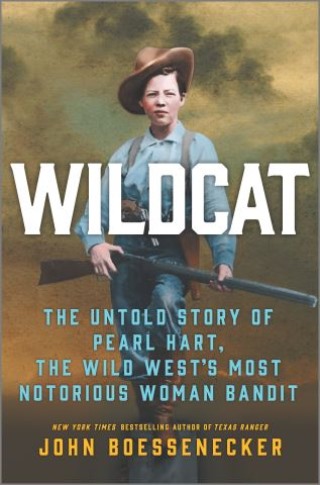 The Untold Story of Pearl Hart, the Wild West's Most Notorious Woman Bandit

A True West magazine Best Book of 2021, a nominee for the MPIBA Annual Reading the West Book Award, and a Top Pick in the Annual Southwest Books of the Year by Pima County Public Library

“[A] true-life adventure saga about the female outlaw who robbed a stagecoach at gunpoint in Arizona in 1899.” –New York Times Book Review

The little-known story of Pearl Hart, the most famous female bandit in the American West.

On May 30, 1899, history was made when Pearl Hart, disguised as a man, held up a stagecoach in Arizona and robbed the passengers at gunpoint. A manhunt ensued as word of her heist spread, and Pearl Hart went on to become a media sensation and the most notorious female outlaw on the Western frontier. Her early life, family and fate after her later release from prison have long remained a mystery to scholars and historians—until now.

Drawing on groundbreaking research into territorial records and genealogical data, ’s is the first book to uncover the enigma of Pearl Hart. Hailed by many as “The Bandit Queen,” her epic life of crime and legacy as a female trailblazer provide a crucial lens into the lives of the rare women who made their mark in the American West.

John Boessenecker: John Boessenecker is the author of nine books, including New York Times bestseller Texas Ranger: The Epic Life of Frank Hamer, the Man Who Killed Bonnie and Clyde. He has received the Spur award from Western Writers of America, the Best Book award from Westerners International, and in 2011, 2013 and 2019 True West named him Best Nonfiction Writer. He has appeared frequently as a historical commentator on PBS, The History Channel, A&E, and other media. He lives near San Francisco, California.