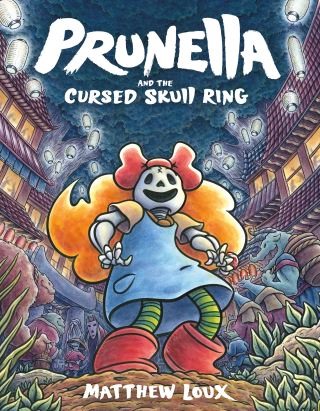 Prunella and the Cursed Skull Ring

There are whispers around the village that monsters are lurking outside the gates. Prunella doesn't pay this talk much mind—until she unearths a strange skull-shaped ring in her garden. When she places it on her finger she's transformed into a skeleton girl, terrifying her monster-fearing town! Exiled, Prunella wanders the wilderness, where she discovers that monsters aren’t as bad as she’s been led to believe.

With her new friends, undead pirate Captain Rip Skeleton and Francis, a floating, fiery skull, at her side, Prunella is sure to find a way to reverse this curse…but does she really want to?