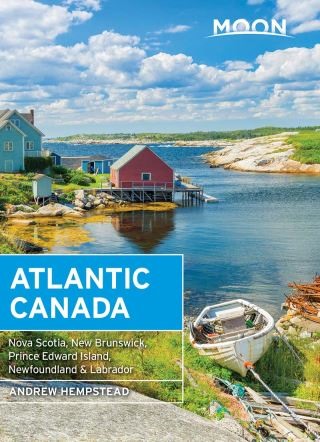 Catch a glimpse of the world's rarest whales, hike through lush forests, or wander around quaint historic towns: the very best of the northeast is yours with Moon Atlantic Canada. Inside you'll find:
Get to know the best of Atlantic Canada with Moon's local insight, expert tips, and unique experiences.

About Moon Travel Guides: Moon was founded in 1973 to empower independent, active, and conscious travel. We prioritize local businesses, outdoor recreation, and traveling strategically and sustainably. Moon Travel Guides are written by local, expert authors with great stories to tell—and they can't wait to share their favorite places with you.

Andrew Hempstead:
While writing Moon Atlantic Canada, Andrew Hempstead traveled extensively through all four provinces. He feasted on traditional rappie pie along the Acadian Coast, viewed the wonders of Prince Edward Island through the eyes of his children, and drove the entire length of the Trans-Labrador Highway. These diverse experiences, along with input from untold numbers of locals and a love of the outdoors, created this guidebook.
As a professional travel writer, Andrew spends as much time as possible out on the road. During his travels, he experiences the many and varied delights of Nova Scotia the same way his readers do.
Since the early 1990s, Andrew has authored and updated more than 60 guidebooks, and supplied content for regional and national clients like Expedia and KLM. His photography has appeared in a wide variety of media, ranging from international golf magazines to a Ripley's Believe it or Not! Museum.
Andrew and his wife Dianne also own Summerthought Publishing, a Canadian regional publisher of nonfiction books. He is a member of The Diners Club® World's 50 Best Restaurants Academy. Andrew has also spoken on travel writing to a national audience and has contributed to a university-level travel writing textbook.