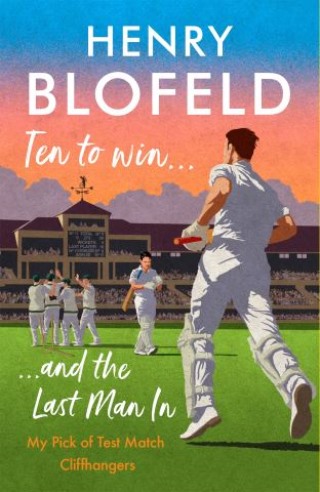 My Pick of Test Match Cliffhangers

'Is there anything in sport to compare with the sustained excitement of a cricket match, especially a Test match, in which the advantage continually fluctuates one way and then the other, and when the match enters its last few minutes, all four results are still possible?'

After entertaining countless radio listeners around the world for decades, who better to convey the breathless drama of a Test match cliffhanger than Henry Blofeld? Now, in Ten to Win . . . and the Last Man In, he has personally selected thirty matches featuring unforgettable finishes and brought them vividly to life again in his own inimitable way.

Ranging from the match-winning bowling of F.R. Spofforth against W.G. Grace's England in 1882, via the first tied Test between Benaud's Australia and Worrell's West Indies in 1960, to the never-say-die batting of Ben Stokes in 2019, he picks out the key events and performances of each memorable match and describes them as only he can.

Alongside the big-hitting heroics of Jessop in 1902 and Botham in 1981, he revisits less celebrated matches such as South Africa's hard-fought first Test win in 1906, as well as a crucial innings from Denis Compton in 1948 and a match-saving performance by a young Alan Knott in Guyana in 1968 - one of the most exciting matches he has ever witnessed first-hand.

Filled with colourful detail and informed by insight gained from a lifetime immersed in the sport he loves, Henry Blofeld's latest book will leave the reader in no doubt - as he himself puts it - about 'what an absurdly irresistible game cricket can be'.

Henry Blofeld: Henry began writing about cricket, for The Times, in May 1962 and in 1972 he started his long career as a commentator with the BBC's Test Match Special. During his career he has written for numerous papers and broadcast for both radio and television for many networks around the world especially in Australia and New Zealand. Between 1991 and 1993 he joined Sky Television before returning to Test Match Special after the death of Brian Johnston early in 1994. Since 2002 Henry Blofeld has performed in his humorous one-man show in theatres all round the country, and later he teamed up with his former TMS producer, Peter Baxter, for more than 250 two-man shows. He also had a successful partnership with England Spin Bowler, Graeme Swann. Henry now tours the country with his one man show.