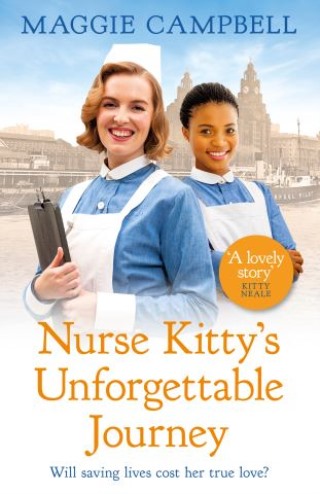 An enjoyable read about love, courage and discovery during a time of change in post war Britain. A lovely story! KITTY NEALE

When Nurse Kitty becomes the NHS's poster-girl for its overseas recruitment drive, she swaps the grey post-war backstreets of Manchester for the palm-fringed island of Barbados. But will her determination to save the NHS lose her everyone she loves?

It's 1949 and nurse Kitty Longthorne is still hard at work at Manchester's Park Hospital. The one-year-old NHS is inundated by the nation's sick and dying, made worse by a crippling labour shortage.

Now engaged, Kitty and James adore each other, but once they marry, she will be expected to leave the job that means so much to her. When she is offered the trip of a lifetime - a voyage by sea to Barbados to recruit nurses to join Park Hospital's ranks - adventurous Kitty is desperate to go. Her brother Ned has been there for years, and she simply cannot resist an opportunity to track him down and see what exactly he's been up to.

But what of her beloved James? What of the baby she suspects she may be carrying?

Returning home, Kitty has more to contend with than she ever anticipated: a gravely ill father, a dejected fiancé and the close-minded views of her peers upon the arrival of Kitty's first, hardworking recruit - Nurse Grace. After paradise, will Manchester ever be the same again?

An uplifting, heart-wrenching novel based on the true story of the first ever NHS hospital, for fans of Donna Douglas and Nancy Revell.

A galloping read that conjures up life in a late 1940s hospital, complete with fierce matrons and handsome doctors. Nurse Kitty is a feisty heroine who sticks her neck out to protect her patients, while trying to resolve her own family problems and heal her broken heart. It's engaging and atmospheric. GILL PAUL

I'm sure readers will love Nurse Kitty as she struggles to find true love when everything is going against it. I loved the end-of-WW2 setting, which is vividly imagined, and the sheer energy of Maggie Campbell's pacy prose. A perfect escapist read. KITTY DANTON, author of A Wartime Wish

Maggie Campbell: Margaret Campbell grew up in Manchester at a time when the city was still on its knees, post-war. She can just about remember the end of rationing! After decades of working as a seamstress in factories, once her children had grown up, Margaret retrained to be a midwife - a career she adored. She now lives in a cottage that overlooks the rolling Pennines where she writes, grows rare dahlias and keeps chickens.