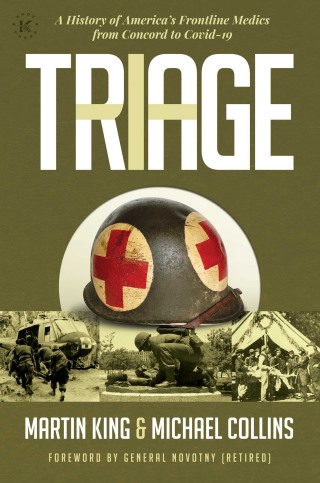 A History of America's Frontline Medics from Concord to Covid-19

“I have walked the battlefields with Martin King, who has traversed them countless times with veterans. No one knows these stories like Martin, and no one can tell them quite the way he does.”
—Rick Beyer, New York Times bestselling author of The Ghost Army of World War II

“Few things bring history to life like the words of those who lived through it. Martin King offers us a glimpse into those experiences, documenting a young nation in the most formative periods of its history. Insightful, moving, and important, this book is a valuable tool for anyone wanting to better understand America’s role in the most brutal of conflicts.”
—Dan Snow, BBC TV Presenter and historian, History Hit TV

“I have never known better stories in my life. Thoughtful and touching beyond belief. The context Martin King provides to help tell the story is beyond reproach. This is 11 on a scale of 10.”
—Commander Jeffrey Barta, Deputy Museum Systems Operations Office, Naval History and Heritage Command, Washington, DC

“Our soldiers and their missions have greatly benefited from the compassion, commitment, and selfless service of all frontline medics. Thank you for all that you’ve done for our nation, its soldiers, and their families.”
—General David H. Petraeus, United States Army (Retired)

“Martin King has a keen eye for the human side of conflict. In His attention to the experience of medical personnel and his excellent prose provides interesting additions It’s a wonderfully unique book that offers the reader a great insight into everything about the frontline medics.”
—Professor Jerome Sheridan, Author, Military Historian, American University

Martin King: Martin King is an acclaimed Emmy Award–winning British historian and author of twelve published titles who has lived in mainland Europe since 1981. He speaks German, Dutch, Italian, Latin, and French. In frequent demand as a public speaker, he has lectured at many universities and schools along with British and US military bases throughout the world. In 2005, the History Channel hired Martin as their historical consultant on the acclaimed series Cities of the Underworld, and in 2007 he became the historical consultant and writer on the hit series Greatest Tank Battles, which is still one of the most-watched military documentary series ever made. Shortly thereafter, he accepted an invitation to work as a presenter on an episode of the series Narrow Escapes with British Academy of Film Award (BAFTA)–winning documentary makers, WMR.

In 2014, Martin became the executive producer and appeared in the Emmy Award–winning documentary titled Searching for Augusta: The Forgotten Angel of Bastogne. The renowned documentary is currently being screened across America on PBS and Netflix.

He has been received at the Pentagon, West Point Military Academy, Valley Forge, and the US Embassy in Brussels. His campaign work for World War II veterans recently led to the US military personnel who presented him with a “Services to Education” certificate at Joint Base USAF Fort McGuire-Lakehurst-Dix in New Jersey. The local municipality recently made Martin an honorary citizen for his work with war veterans and elected him as a “European Cultural Ambassador.”|||Michael Collins is a military historian and author who has co-written several books with Martin King, including Voices of the Bulge, The Tigers of Bastogne, The Fighting 30th Division, To War with the 4th, Warriors of the 106th, and Lost Voices: The Untold Stories of America’s World War I Veterans and their Families. He also associate produced the Emmy Award–winning documentary Searching for Augusta: The Forgotten Angel of Bastogne. He specializes in twentieth-century history, specifically World War I and World War II. He lives in Western Massachusetts, and is widely renowned as a leading archivist and researcher.