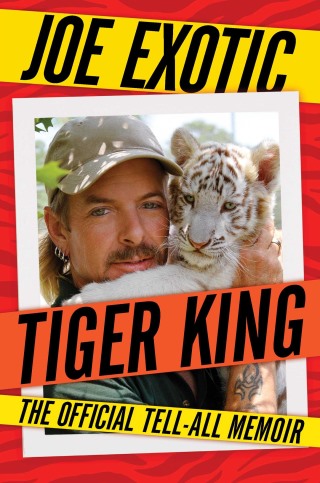 Joe Exotic, star of the Netflix original documentary that “consumed the pop-cultural imagination” (The Atlantic) and transfixed a nation in the midst of a global crisis, opens up about his outlandish journey from Midwestern farmer to infamous Tiger King, and finally, to federal inmate.

Shortly after his arrest (for charges including hiring a hitman to murder his rival, Carole Baskin), Joe Exotic began keeping a daily journal of his life behind prison walls. In support of his defense, Joe began writing everything he wished he could tell a jury of his peers. Little did Joe know that mere months later, the self-proclaimed “gun-toting, gay redneck with a mullet” would become one of the most famous men in the world.

Written entirely while incarcerated, this no-holds-barred memoir is Joe Exotic’s first, and maybe only, chance to tell his side of the story—the full story. Despite never having seen Tiger King, Joe is aware of what’s been said about him, and he’s eager to answer all the questions the world is dying to know. Such as:

-The origin of the mullet.
-How Joe became the Tiger King.
-Joe’s favorite animals.
-Joe’s relationships.
-Joe’s explanation of all charges against him.
-What happened with Trump’s pardon.
-What he thinks about caging animals now that he lives in a cage.
-What Joe has to say now about Carole Baskin.

From his tragic childhood riddled with abuse to his dangerous feuds with big cat rivals and beyond, nothing is off the table. This is the exclusive and definitive read for anyone who binged the “riveting” (Vanity Fair) documentary and finished it hungry for more. A memoir unlike any other, it proves that they can cage the Tiger King, but they can’t silence his roar.

Joe Exotic: Joe Exotic, born Joseph Allen Schreibvogel, is an Oklahoma-based zookeeper known for his tigers, lions, and other big cats. He’s currently serving time in prison for murder-for-hire and for violating the Lacey Act and the Endangered Species Act, all of which Joe vehemently denies. The Netflix original documentary Tiger King: Murder, Mayhem, and Madness propelled him to stardom, and he quickly became a worldwide phenomenon.