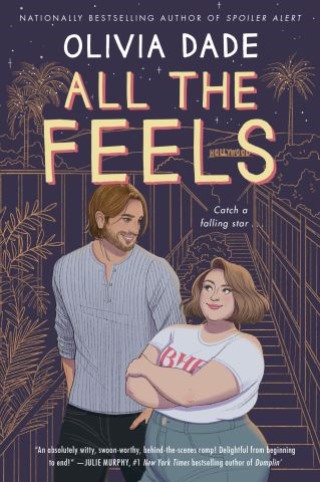 Following Spoiler Alert, Olivia Dade returns with another utterly charming romantic comedy about a devil-may-care actor—who actually cares more than anyone knows—and the no-nonsense woman hired to keep him in line.

Alexander Woodroe has it all. Charm. Sex appeal. Wealth. Fame. A starring role as Cupid on TV’s biggest show, Gods of the Gates. But the showrunners have wrecked his character, he's dogged by old demons, and his post-show future remains uncertain. When all that reckless emotion explodes into a bar fight, the tabloids and public agree: his star is falling.

Enter Lauren Clegg, the former ER therapist hired to keep him in line. Compared to her previous work, watching over handsome but impulsive Alex shouldn’t be especially difficult. But the more time they spend together, the harder it gets to keep her professional remove and her heart intact, especially when she discovers the reasons behind his recklessness…not to mention his Cupid fanfiction habit.

When another scandal lands Alex in major hot water and costs Lauren her job, she’ll have to choose between protecting him and offering him what he really wants—her. But he’s determined to keep his improbably short, impossibly stubborn, and extremely endearing minder in his life any way he can. And on a road trip up the California coast together, he intends to show her exactly what a falling star will do to catch the woman he loves: anything at all.

Olivia Dade grew up an undeniable nerd, prone to ignoring the world around her as she read any book she could find. Now she has finally achieved her lifelong goal of wearing pajamas all day as a hermit-like writer and enthusiastic hag. She currently lives outside Stockholm with her patient Swedish husband, their whip-smart daughter, and the family’s ever-burgeoning collection of books.