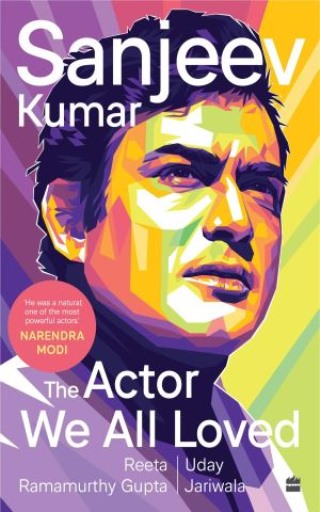 The Actor We All Loved

'He was a natural; one of the most powerful actors.' --Narendra Modi

The 1970s were indeed the golden era of Bollywood. In the decade that revolutionized Hindi cinema, there was one actor who was every director's fail-safe artiste. When he entered the frame, the audience would sigh with relief, 'Nothing can go wrong now!'

Sanjeev Kumar was the antithesis of the typical Bollywood hero doing romance and action. Not one to crave glamorous roles, he was more interested in versatility. From his mature roles in films like Mausam and Aandhi to his comic timing in Angoor or the angst of person with disabilities in Koshish-he was truly a thinking man's actor. His expressive face, inflections and pauses, natural ease for lip-syncing, all of it made him the complete package.

Written by his nephew Uday Jariwala and Reeta Ramamurthy Gupta, this biography takes us through Sanjeev Kumar's journey to becoming one of the greatest actors Bollywood has seen, with personal essays by his friends Gulzar, Randhir Kapoor, and co-stars Sharmila Tagore, Moushumi Chatterjee, Tanuja, among others.

Reeta Ramamurthy Gupta: Reeta Ramamurthy Gupta is a prolific biographer, reviewer for CNBC TV18, and a bibliophile. She is credited with the acclaimed Red Dot Experiment, a ten-year-long and six-nation study on how culture impacts communication.
|||Uday Jariwala is the heir to the legacy of Sanjeev Kumar. He runs the Sanjeev Kumar Foundation, an NGO that works towards the promotion of theatre, art and education. He is a businessman and lives in Mumbai with his wife Neelam and their two children, Aryan and Saachi.