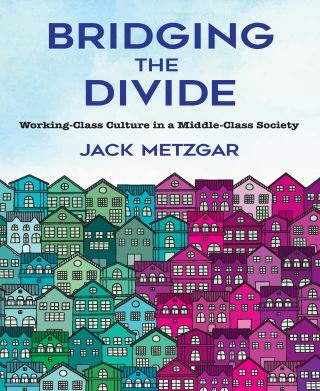 Working-Class Culture in a Middle-Class Society

In Bridging the Divide, Jack Metzgar attempts to determine the differences between working-class and middle-class cultures in the United States. Drawing on a wide range of multidisciplinary sources, Metzgar writes as a now middle-class professional with a working-class upbringing, explaining the various ways the two cultures conflict and complement each other, illustrated by his own lived experiences.

Set in a historical framework that reflects on how both class cultures developed, adapted, and survived through decades of historical circumstances, Metzgar challenges professional middle-class views of both the working-class and themselves. In the end, he argues for the creation of a cross-class coalition of what he calls "standard-issue professionals" with both hard-living and settled-living working people and outlines some policies that could help promote such a unification if the two groups had a better understanding of their differences and how to use those differences to their advantage.

Bridging the Divide mixes personal stories and theoretical concepts to give us a compelling look inside the current complex position of the working-class in American culture and a view of what it could be in the future.

Jack Metzgar is Professor Emeritus at Roosevelt University. He is author of Striking Steel.