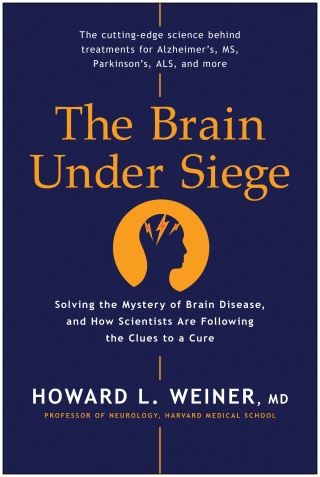 The Brain Under Siege

Solving the Mystery of Brain Disease, and How Scientists are Following the Clues to a Cure

1 in 6 people suffer from brain diseases like MS, Parkinson’s, and Alzheimer’s. Now, a Harvard neurologist takes you inside the brain under attack—and illuminates the path to a cure.

Multiple Sclerosis. Parkinson’s Disease. Alzheimer’s. ALS. Chances are, you know someone with a neurologic disease. Because the brain controls so much and is integral to our identity, the diseases that affect it are uniquely devastating both to patients and families.

And because it remains the most mysterious of our vital organs, treating the brain is an ongoing puzzle.

In The Brain Under Siege, Howard Weiner likens the brain to a crime scene, showing readers how “clues” point to causes and suggest paths to a cure. He takes readers on a journey through the latest technological advances, exploring which routes of investigation have gone cold and which have led to breakthroughs. Readers couldn’t ask for a better guide: A professor of neurology at Harvard Medical School and co-director of the Ann Romney Center for Neurologic diseases, Weiner is an internationally renowned expert, who pioneered immunotherapy in MS and is currently investigating an Alzheimer’s vaccine.

Informative and engaging, this groundbreaking book tells the story behind the science—painting a picture of the discoveries, setbacks, false leads, and victories on the front lines of brain research. Weiner also offers unique insight by exploring the experiences of the brave patients and families who make cutting-edge clinical trials possible.

Both a clear-eyed assessment of where the science stands and a gripping and poignant narrative of the dramatic pursuit for a cure, The Brain Under Siege is a must-read for patients, families, and anyone interested in unraveling the mysteries  of the brain.

Howard L. Weiner: Howard L. Weiner is the Robert L. Kroc Professor of Neurology at the Harvard Medical School, Director and Founder of the Brigham MS Center and codirector of the Ann Romney Center for Neurologic Diseases at Brigham & Women's Hospital in Boston. He has pioneered therapy in multiple sclerosis and has investigated disease mechanisms in brain diseases including MS, Alzheimer’s Disease, ALS, stroke and brain tumors. Dr. Weiner is a recipient of the John Dystel Prize for MS Research and received the NIH Director’s Transformative Research Award for his research in Alzheimer’s disease. He has pioneered the investigation of the mucosal immune system for the treatment of autoimmune and other diseases and is currently developing a nasal vaccine to treat Alzheimer’s disease and novel therapies for MS and ALS.  The Harvard Medical School honored him with the establishment of the Howard L. Weiner Professorship of Neurologic Diseases. He is the author of the book Curing MS and award-winning films, the documentary What is Life? The Movie and the feature length drama, Abe and Phil’s Last Poker Game starring Martin Landau and Paul Sorvino.