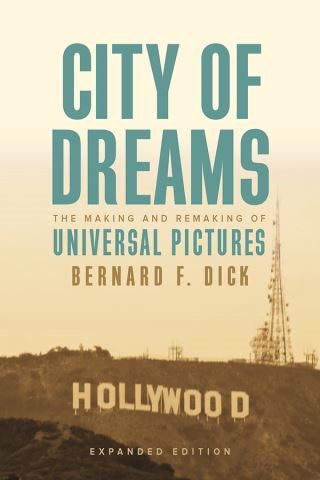 The Making and Remaking of Universal Pictures

Horror films. Deanna Durbin musicals. Francis, the talking mule. Ma and Pa Kettle. Ross Hunter weepies. Theme parks. E.T. (1982). Apollo 13 (1995). These are only a few of the many faces of Universal Pictures. In February 1906, Carl Laemmle, German immigrant and former clothing store manager, opened his first nickelodeon in Chicago, where he quickly moved from exhibition to distribution and then to film production. A master of publicity and promotions, within ten years "Uncle Carl" had moved his entire operation to Southern California, founded a city, and established Universal Pictures as one of the major Hollywood studios.

In City of Dreams, Bernard F. Dick traces the history of Universal Pictures from its humble early origins to the modern day and analyzes the studio's films, from horror flicks featuring Karloff and Lugosi to comedies starring Abbott and Costello and W. C. Fields. Dick details how the Laemmle family was eventually forced out of the Universal empire, replaced by a string of studio heads who entered and exited one after another—the beginning of the age of corporate Hollywood, which transformed Universal Pictures into NBCUniversal, a subsidiary of Comcast. Dick explains how the Universal-International merger in 1946, Decca's stock takeover in the early 1950s, and MCA's buyout in 1962 all presaged today's Hollywood, where the art of the deal often eclipses the art of making movies. Ultimately, although stars and executives have come and gone, shaping and reshaping the studio's image, Universal's revolving globe logo has lit up screens around the world through it all.

Bernard F. Dick: Bernard F. Dick is professor emeritus of communications and English at Fairleigh Dickinson University (Teaneck campus). He holds a doctorate in classics from Fordham University and is the author of numerous film books including Anatomy of Film, Hal Wallis, and That Was Entertainment.