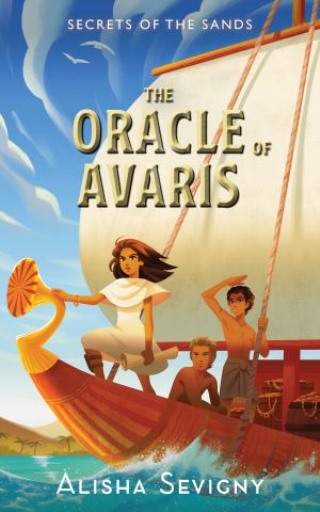 The Oracle of Avaris

A search for answers from a mysterious Oracle has Sesha and her friends navigating intrigue and danger in this thrilling series finale.

Leaving the oasis, Sesha and her friends set sail for Avaris, intent on stopping the Hyksos chieftain from claiming the throne and declaring war on Thebes. On the journey, Sesha learns that she and the scroll are at the centre of a pair of prophecies made by a famed oracle — ones with staggering implications for both her and the Hyksos people.

But when the crew arrives in the bustling port city, they are stunned to discover the oracle is missing. With the prophecies now in doubt and their lives in danger, Sesha, Paser, and Reb must race to find a mysterious priestess sect and witness the third, and final, prophecy before the upcoming lunar eclipse.

As the young scribes seek answers, Sesha must untangle her past and future while keeping war from erupting in the present. For there is one person she cannot bear to face across the Hyksos battlefield: her brother.

Be sure to read Sesha’s earlier adventures, The Lost Scroll of the Physician and The Desert Prince.

Alisha Sevigny is the author of The Lost Scroll of the Physician and The Desert Prince, the first books in the Secrets of the Sands series, as well as the acclaimed young adult novels Summer Constellations and Kissing Frogs. She splits her time between Canada and the Cayman Islands.