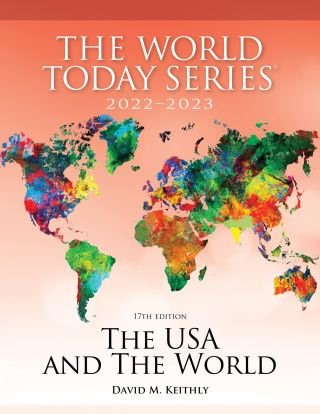 The World Today Series: USA and The World describes not only what happened, but puts events in the context of the past and criticizes policy actions as appropriate. The result goes deeper than most of what appears in current publications. Updated annually and part of the renowned “World Today Series,” USA and the World presents an unusually penetrating look into America and its relationship to the rest of the world. The combination of factual accuracy and up-to-date detail along with its informed projections make this an outstanding resource for researchers, practitioners in international development, media professionals, government officials, potential investors and students. Now in its 17th edition, the content is thorough yet perfect for a one-semester introductory course or general library reference.

David M. Keithly is a retired university professor. He has published five books and over 80 articles in journals and magazines, and served as editor of The Defense Intelligence Journal and Civil Wars. He was a Fulbright fellow in Europe twice, a fellow of the Institute on Global Conflict and Cooperation at the University of California, a resident scholar at the Friedrich Naumann Foundation in Bonn, Germany, and a legislative fellow in the parliament of the German state of Thüringen. He is president of the Fulbright Association’s Southeast Virginia Chapter. He has a Ph.D. from Claremont Graduate University and an M.A. from the German University of Freiburg. He did additional graduate work at the French University of Rennes. Selected to “Outstanding Young Men of America,” he was also designated a Navy National Reserve Officer of the Year in 1993. In his younger years, he was on the Navy physical fitness team and is now an avid senior athlete. He was named the IMA (Individual Mobilization Augmentee) Officer of the Year at the Defense Intelligence Agency in 2000, and received the annual faculty research award at the Joint Military Intelligence College in 2001. A retired reserve officer, he held field-grade rank in two services.