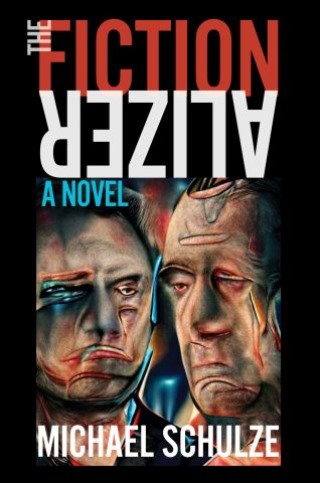 Enter the mad, mysterious, and unreliable world of the Fictionalizer! Waldo Stanton, a high-technology executive, takes a frightening but revelatory journey from Manhattan to Los Angeles in the last two months of 1999. Waldo suffers from paranoid schizophrenic psychosis, and his condition has been worsened by his psychiatrist, who has his own strange agenda.

Following some life-changing and traumatizing incidents, Waldo heads west to confront the person he suspects is responsible: his identical twin brother, Richard Light, CEO of a shadowy corporate empire based in Hollywood.

Light seeks to perfect a drug called the Fictionalizer, which could purportedly modify reality itself. As Waldo travels cross country, he invades several of Light's heavily guarded office buildings to uncover information about the development effort.

But as the narrative progresses, questions arise: How much of this journey is "fact," how much "fiction"? Who is who in the world of Waldo's multiple personalities? Will Waldo find Light? Will the Fictionalizer work? If so, what does Light intend to do with it?

And what will happen then?

"To read Love Song, a work twenty years in the creation, an audacious and uncompromising descent into the American fascination with violence and the contemporary pornography of horror, is to be abruptly within the terrifying/intriguing sphere of brutal novelty, something 'deep, formless, and profoundly dangerous.' It plays with genres - the horror story, the play-within-a-play, the psychosexual mystery-thriller - in streams of language that test the weight-bearing capacity of the printed page . . . ."

-from the Review of Contemporary Fiction, October 2003

"As well as the stylistic qualities, I like the attitude of this book. Not the puling whine of the postmodernist, the cringing minimalist – but good muscular revulsion, a cadenced roar against the nastiness of humanity ...."

-Laura Argiri, author of The God in Flight

"You'd need bionic nerves to take on this novel. Young bionic nerves. The book is drenched in sex and violence. And monsters. And paranoia. It made me feel titillated, repelled, baffled, and indicted all at the same time.â¨
Still, the narrative, at least at the beginning, barrels like a semi rolling downhill, and even at the end, when the text begins to break down into seemingly random words and letters, the momentum holds. How the author does that, I don't know. The observations are acute; the language has a sort of vibrating flatness, like an obscene joke being told with a face so straight you could roll a marble across it ...."â¨
-Sue Cologgi

"Love Song is a highly creative, multidimensional effort combining a detective story, subconscious undertones, and a myriad of characters in a fantasy that's surprisingly readable. This is the book Stephen King might write if he were willing to take the time... it's a fascinating tour de force that works on many levels ...."