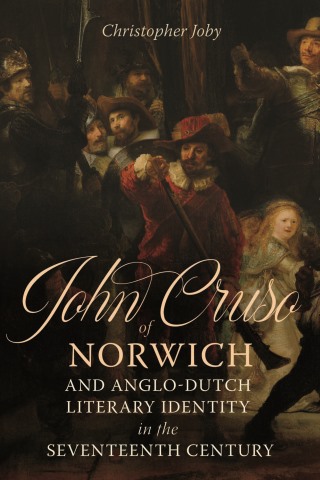 John Cruso of Norwich (b. 1592/3), the eldest son of Flemish migrants, was a man of many parts: Dutch and English poet, translator, military author, virtuoso networker, successful merchant and hosier, Dutch church elder and militia captain. This first book-length biography, making extensive use of archival and literary sources, reconstructs the life and work of this multi-talented, self-made man, whose literary oeuvre is marked by its polyvocality.

Cruso's poetry includes a Dutch amplificatio on Psalm 8, some 221 Dutch epigrams, and elegies (one of which frames the most important Anglo-Dutch literary moment in the seventeenth century, a collection of Dutch and Latin elegies which marked the death of the London Dutch church minister, Simeon Ruytinck, and included verses by Constantijn Huygens and Jacob Cats). As a military author, Cruso published five works, in English, including two translations from the French. These works display his knowledge of the canon of classical and Renaissance literature, which, in turn, allowed him to fashion himself as a miles doctus, a learned soldier, and make a contribution to military science in England prior to and during the English Civil Wars.

In focusing on the rich and varied life and works of John Cruso, this book also explores ideas and practices of identity formation in the early modern period, as well as allowing Cruso's life to shed further light on the migrant experience in seventeenth-century Norwich. Joby shows how a second-generation migrant could successfully integrate himself into English society, whilst continuing to engage with his Low Countries heritage.

Christopher Joby: CHRISTOPHER JOBY is Professor in Dutch Studies at Adam Mickiewicz University, Poznań, Poland, and Visiting Scholar at the Academia Sinica, Taipei, Taiwan. His research focusses on the intersection of the Dutch language and culture and other languages and cultures in a historical context.